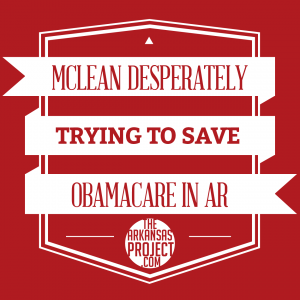 As loyal readers of this humble blog know, state Rep. James McLean, inaugural member of the Davy Carter wing of the Democratic Party, has been having more attendance troubles at the legislature in 2014 than I had with my 8 a.m. Women’s History class my senior year of college.
He’s missed 14 out of 19 education committee meetings that he was supposed to chair in 2014. A .263 batting average might be acceptable in baseball, but it isn’t so great for a committee chairman.
However, one issue McLean hopes to have a 100% batting average on — if elected in his state Senate race against conservative Republican Linda Collins-Smith — is Obamacare’s Medicaid expansion.
He can’t make 30 percent of his meetings as education committee chairman, but if you want a state Senator that will never waver in his support for Obamacare — he’s your huckleberry.
From a recent speech by McLean to the local Chamber of Commerce:

In short, McLean seems to be saying that if you’re against the private option, you’re a part of a “rigid” ideology of people that spend their days secretly hoping hospitals close down.
Nonetheless, the private option Medicaid expansion has failed to be the magic bullet that some legislators promised.
For example, the Crittenden County Hospital closed its doors in September; Mississippi County voters had to bail out their local hospital with a half-cent sales tax hike in October.
Like many others, hospital administrators at Batesville’s White River Medical Center (the hospital in McLean’s state Senate district) were quick to rattle a tin cup in 2013 when it came to the prospect of more tax dollars flowing into their coffers through Medicaid expansion. This, mind you, would be in addition to the well over $3 million in government grants White River received in 2010 and 2011.
Gary Bebow, CEO of White River Medical Center, told the Arkansas Times in 2013:

It’s absolutely critical that [expansion] gets passed by the state legislature,” White River Health System CEO Gary Bebow said. WRHS, which includes hospitals in Batesville and Mountain View, as well as clinics in various rural communities in the state, has projected a loss of $90 million over the next 10 years in Medicare reimbursement cuts. Meanwhile, if expansion goes through, they project to bring in an additional $45 million over the next decade. Things will be tight either way, but without expansion the situation begins to look dire.
…
“This state is paying for the federal cuts under Obamacare,” Bebow says. “The point is this is one way that’s been a gift back to us … if we don’t take advantage of it, that’s unfortunate.”

Bebow would have you believe that White River Medical Center was something like a sympathetic Dickens character (“Please sir, I want some more tax dollars.”) before the “private option” Medicaid expansion.
So I was pretty surprised when I checked Form 990s on White River Medical Center  — only to find that Bebow got himself a nice compensation raise from 2010 to 2011: from $489,332 to $549,506. Taking a 12% compensation increase — and, shortly thereafter, lobbying the legislature for more public funding through Medicaid expansion because times are “tight”: nice work if you can get it.
P.S.: McLean seems to be unaware that an increasingly large number (60%) of Arkansans subscribe to this so-called “rigid” ideology against Obamacare.