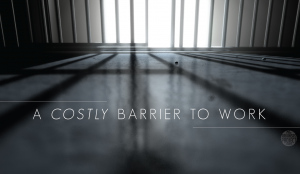 It’s a good idea for people to work. It’s also a good idea to help people who are leaving prison remain out of prison. If we put these two ideas together, it’s probably a really good idea to remove barriers that prevent ex-prisoners from getting work and that make it more likely that they will re-offend.

The barriers in question are occupational licensing laws. In a recent Democrat-Gazette op-ed, David Mitchell and Thomas Snyder, economics professors at the University of Central Arkansas, discuss how these laws keep ex-prisoners from finding work. That lack of work, in turn, may lead to more of these people returning to jail, known as recidivism.

They note that Arkansas has higher licensing burdens than neighboring states, then discuss how these burdens affect recidivism:

If Arkansas de-licensed 50 percent of these occupations or reduced the requirements of these licenses to match our neighbors, our recidivism rate would be predicted to fall by 17.5 percent in five years. Reduce the recidivism rate by 17.5 percent and you only get 3,300 prisoners recidivating. Those 700 fewer prisoners a year could help us save over $15.5 million per year.

They give some real-life examples of how the state’s licensing rules play out when it comes to stopping ex-offenders who want to turn their lives around:

…the state Plant Board can deny or refuse renewal of a license to anyone who does not have a record of moral or financial responsibility. Does this mean ex-offenders couldn’t work at the nursery department of Lowe’s? How does that help us as taxpayers? Does this make us safer?

Burdensome occupational licensing laws cause a host of problems. We’ve discussed some of them previously on TAP. Add higher recidivism rates, and higher taxpayer costs to incarcerate more prisoners, to that list.

U.S. Labor Secretary Alexander Acosta sounded a similar theme at a speech he gave yesterday to the National Association of Counties:

It’s clear at both the national and state level — licensing laws cause problems for workers, especially those who may have an already-rocky path to a job. To improve the state’s economy, open up the job market, and reduce the burden on taxpayers, it’s long overdue to reform Arkansas’s occupational licensing laws.