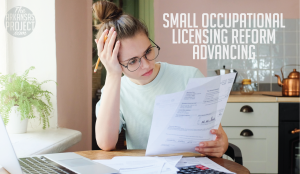 If someone is delinquent on his or her student loans or has defaulted, does it make sense to make it more difficult for that person to earn money?

Many people would say “no” to this question. The failure to pay student loans is probably related to a lack of sufficient income. So making it more difficult to earn that income would probably exacerbate the student loan problem. But some states, including Arkansas, have policies in place that revoke the occupational licenses of people whose student loan payments are delinquent or in default.

Rep. Austin McCollum has introduced HB 1296 to fix this policy in Arkansas. Nationally, Senators Elizabeth Warren and Marco Rubio have teamed up for similar legislation.

Marc Hyden, State Government Affairs Director at the R Street Institute, testified about similar legislation in Georgia. He spelled out the absurdity of suspending occupational licenses for student loan defaults:

When occupational license suspensions are initiated, licensees are prohibited from working in their profession, which merely makes it harder to repay their debts. After all, it is difficult for individuals to re-enter satisfactory repayment status if they do not have a job. This policy essentially creates joblessness and subsequently pushes the newly unemployed into poverty, making it more likely that they will apply for taxpayer-funded assistance. Therefore, this government-created poverty harms more than just those in default.

Rep. McCollum’s bill has unanimously passed the House of Representatives. It is now being considered by the Senate.

While this does not reform bigger problems of the state’s occupational licensing regime, it does address one of its problems. That is a good beginning, although much more work needs to be done.

As pointed out above, revoking a license to work makes it more difficult to repay a loan. There are better ways to deal with student loan defaults. It is good to see Arkansas legislators taking action on this small but important issue.