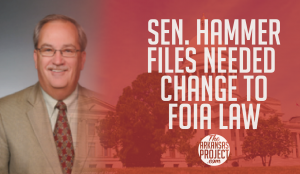 It is enshrined in the laws of Arkansas that government officials and employees should not be able to shield their actions from public view. But sometimes these actions are outsourced to private foundations, which makes it more difficult for media and others to determine what is happening. This isn’t the way that public disclosure is supposed to operate.

Sen. Kim Hammer‘s bill, SB 231, to amend the Freedom of Information Act (FOIA) is a good step in fixing this situation. Sen. Hammer seeks to clarify the FOIA after a series of news reports over the last few years in which various private foundations, set up to provide funding and labor to public entities, have resisted producing public records to the media. Here’s an example. Experts tell TAP that the foundations should be providing public records, but the cost of litigating in response to their refusals is prohibitive.

Those interested in small government should care about transparency. If we don’t know what’s going on in government, we cannot determine if there are cronyism and corruption — or something even worse.

The news media have repeatedly reported on scandals involving private entities that have raised tens or even hundreds of millions of dollars in the explicit name of, and on behalf of, public entities. Many times, the general public doesn’t even know that these private entities are not a part of the public institution. Sometimes, the two bodies share space on the same public campus, making them virtually indistinguishable.

Without transparency, these shadow entities would continue their work of shielding the operation of government from the public. This is a recipe for further disaster, as we have already seen scandalous behavior involving foundation and state agency loss of millions of dollars.

SB 231 went through various transformations; most notable is the recent amendment approved by the state’s FOIA Task Force guaranteeing that donor identity is completely protected. This was an appropriate concern of various groups and the senator himself. The bill explicitly exempts donor identifying information from disclosure, guaranteeing that this bill will never negatively impact fundraising, but will help avoid some of the chicanery that can be present when huge sums of money are involved. I anticipate that Hammer will attach this donor-protection amendment to the bill when it is considered later this week.

Robert Steinbuch, a UALR law professor and FOIA expert, tells TAP that this protection in the bill is greater than anything that exists in the current law:

The foundations are getting a great deal, because current law already covers them. The problem is that notwithstanding the law, foundations primarily supporting public entities keep fighting disclosure, and the public can’t afford to litigate. This bill avoids the cost of litigation and provides air-tight protection for donor identity at the same time.

Everyone has an interest in guaranteeing that government isn’t operating in secret. We should also ensure that government activities are not funneled through unaccountable entities. Senator Hammer’s bill helps accomplish these goals.