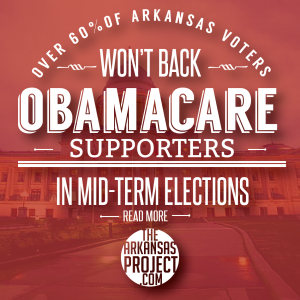 A new poll out today from the Foundation for Government Accountability (FGA) shows that despite some campaigns’ and officials’ ideas to the contrary, Obamacare is still a political loser in Arkansas for 2014.
From FGA:

Over 60 percent of likely voters in Arkansas say they are unlikely to support a candidate who supports ObamaCare in the upcoming election, meaning candidates who support or helped pass Arkansas’ Private Option Medicaid expansion have a target on their backs this November, according to a Foundation for Government Accountability poll released today.
This poll comes on the heels of a Blue Cross Blue Shield announcement last week that the company is cutting Medicare Advantage policies for roughly 4,000 Arkansans. These cuts to Arkansas seniors, which are a direct result of ObamaCare, are being made to pay for Arkansas’s ObamaCare expansion experiment. Instead of keeping promises to Arkansas seniors, ObamaCare is robbing them for the benefit of able-bodied, childless adults.
“ObamaCare is clearly a disaster for Arkansas: It’s bad for the budget, it’s costly for taxpayers, it’s dangerous for patients, and it’s a time bomb for politicians,” said FGA CEO Tarren Bragdon. “All of the negative sentiment and backlash we’re seeing is in direct response to the harm being done to the state of Arkansas by this incredibly terrible and increasingly unpopular law.”
Almost 80 percent of Arkansas’ likely voters say that a candidate’s position on ObamaCare will impact their voting decision, making ObamaCare one of the biggest issues Razorback voters will be addressing at the polls. People are upset about more than just cuts to health care for seniors, they’re tired of having their plans cancelled and seeing their insurance premiums skyrocket.

You can read the rest of the poll here.

One thought on “Poll: Low Support for O’Care in Arkansas”