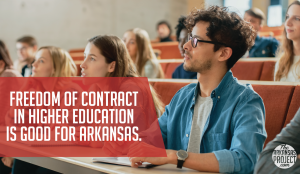 Freedom of contract is fundamental to the free market system. It is an essential feature of liberty. It’s protected by the U.S. Constitution and the Arkansas Constitution. If a contract can be altered by just one party, then it is not truly a contract. This is a conservative value. The weakening of contract rights is being undertaken by liberal universities, and it’s specifically being used to silence and get rid of conservative faculty on campus. See here, here, and here for TAP’s prior coverage of this issue at the University of Arkansas.

It’s widely known that universities are dominated by liberals. Most professors are liberal. But what is less widely known is that virtually all college administrators are even more liberal than faculty. Undermining contract rights shifts whatever influence the few conservative faculty still retain to liberal administrators. UALR law professor Joshua Silverstein, something of a liberal himself, told TAP: “We have seen harassment of conservatives on campus time and again, including of Arkansas Project friend and contributor Robert Steinbuch, a professor of law at the UA Little Rock, William H. Bowen School of Law. Any attempt to purge conservatives is bad for learning, no matter what your belief.”

Universities sometimes claim that they are weakening contract rights to get rid of bad faculty.  But that is hard to take seriously. School officials never present any empirical or even anecdotal evidence to support this assertion. That strongly implies that the real motivation of college administrators is to suppress dissent from conservative professors.

The Freedom of Contract in Higher Education Act will address this situation by prohibiting universities from unilaterally changing the existing employment contracts of faculty. And upon re-establishing that faculty have the same right to freedom of contract as all Arkansans, this law will help to ensure that conservative perspectives are no longer forbidden in the classroom, in academic books and papers, and in other domains on campus.