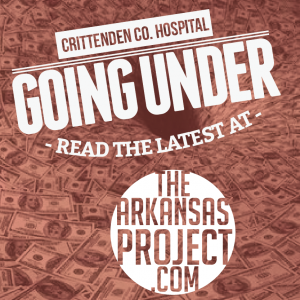 Crittenden Regional Hospital of West Memphis will close its doors on Sept. 7, citing “the challenges of a struggling economy and continued declines in patient volume and reimbursement.
The hospital’s board of trustees made the announcement Monday. It said it made the decision after “exploring all possible options with legal and financial advisors.” The hospital will stop admitting patients today. CRH clinics and home health and hospice services will close Sept. 5.
“We are deeply saddened to have to make this decision after all the attempts that have been made to preserve the hospital for our community,” CEO Gene Cashman said in a news release. “With counsel from national health care consulting firms and the passage of a county-wide sales tax, we had identified a long-term strategic plan that had set our organization on a path to improvement.”
More than 400 people work at the 140-bed hospital.

The Advance Arkansas Institute demonstrated that the private-option talking point about “saving hospitals” was bogus in a policy paper in February.
From the paper:

(Shortly after we published that paper, the Arkansas Hospital Association then proceeded to ridicule our financial analysis of the private option. Although the AHA’s rebuttal provided little in the way of a substantive response, it did quote Ray Davies and Clint Eastwood extensively.)
The private option was far from the only subsidy that the West Memphis hospital received. In addition to the “hospital saving” private option, Crittenden Regional Hospital received the bounty of a recent tax increase and approximately $3.9 million in government grants, according to Form 990s for 2011 and 2012.
In short, the private option obviously isn’t the savior for hospitals that some made it out to be. For more on the program’s broken promises, read former AAI analyst Nic Horton’s recent work on the counterfeit medical savings accounts brought to you by the private option.