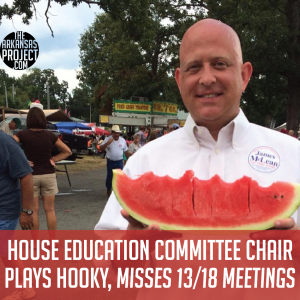 Rep. James McLean, chair of the House Education Committee, has been skipping class.
You’ll remember McLean from our reporting last month. He’s in a state Senate race against former House member Linda Collins-Smith, a conservative Republican. McLean is the inaugural member of the ever-growing Davy Carter wing of the Arkansas Democratic Party.
In his endorsement, Carter said:

At a minimum, to be a “great public servant” and someone “who works across party isles,” you have to show up for work. In particular, you have to attend those boring committee meetings in Little Rock.
McLean hasn’t been very good at this in 2014.
Out of the 18 House Education Committee meetings held this year, McLean has only managed to make it to…5, according to public records just received by The Arkansas Project.
For a little context here, 5 divided by 18 is 28 percent. Admittedly, that’s slightly better than the Razorbacks’ 3 out of 12 winning games in 2013. Woo Pig Sooie!
If elected, State Senate District 19 voters can take pride in knowing their state Senator’s attendance average is similar to the batting average of certain low-level utility infielders.
Here are a few of the matters under discussion at the committee meetings that McLean had better things to do than attend: teacher compensation, student testing, the lack of internet options and capabilities for Arkansas public schools, and changes in public school employee health insurance.
These are issues you’d think a guy who lists one of his qualifications as being Chairman of the House Education Committee might find interesting.
Speaker Carter obviously has a high opinion of McLean. Maybe Carter even believes that “the state needs him in the Senate.” But if McLean’s Senate tenure is anything like his 2014 tenure in the House, McLean might never show up for work.