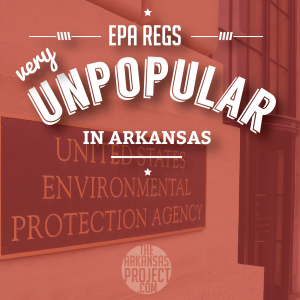 The Environmental Protection Agency’s proposed greenhouse gas regulations are not popular among Arkansas voters, according to data released today by the Partnership for a Better Energy Future (PBEF). The EPA is proposing that, in the next 15 years, states must cut greenhouse gas emissions nationwide by 30 percent below 2005 levels. Arkansas would have to cut emissions statewide by 44.5 percent if the EPA is to reach its overall goal – making our electricity supply less diverse, less reliable, and more expensive.
Findings from the national survey of 1,340 likely voters and a statewide survey of 754 likely voters in Arkansas conducted earlier this month by Paragon Insights include the following:

In July, we wrote about a National Association of Manufacturers’ study, which concluded that the EPA’s Clean Power Plan would cost Arkansas more than 10,000 jobs, make us $240 million poorer because of environmental compliance costs, and shut down most of the state’s coal-fired electric generation.
Instead of flat-out opposing these regulations (as has every other member of Arkansas’s federal delegation),Senator Mark Pryor said this summer that he had “serious concerns” and would “continue to speak with Arkansas stakeholders to gauge how this rule could impact our state’s economy and jobs.”
Regrettably, in 2008 Senator Pryor supported his colleague Barbara Boxer’s infamous “cap & trade” program, which would have capped greenhouse emissions nationwide. Pryor also voted in favor of President Obama’s nomination of EPA head Gina McCarthy, who proposed this extreme mandate on Arkansas.
You can read the full poll results here.