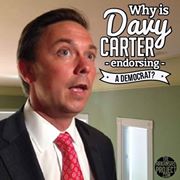 In the course of tweeting the finer points of the Miss America pageant Sunday night, Speaker of the House (and alleged Republican) Davy Carter apparently thought it would be a good time to endorse James McLean, a Democrat, in his race against Republican candidate, Linda Collins-Smith.

I e-mailed Carter to see if this was an official endorsement, but I never heard back from him.
Carter’s statement is one of many examples that show how private option architects are becoming increasingly nervous about the program’s future. You see, Collins-Smith is ardently opposed to the private option, while McLean is in favor of it.
Collins-Smith recently told Talk Business:

I will not support Obamacare in any form.

Although some pro-private option types have argued that the private option has nothing to do with Obamacare (last year, Carter said that “a vote for the private option is a vote against Obamacare”), Collins-Smith remains unspun.
Unfortunately for private option boosters, Republican primary voters haven’t been buying what they’re selling; two pro-private option legislators were defeated in recent Republican primaries for state Senate seats.
Moreover, a recent poll shows the program only receives 35 percent approval, while 44 percent of Arkansans oppose the program. That approval rating drops even lower to 13 percent among Republicans, according to the poll.
Finally, this example of a leading House Republican endorsing a Democrat is especially ironic, given a recent email from House Majority Leader Ken Bragg to caucus members and Republican candidates. In that email, he urged Republicans to show a “united front going in to the general election.”
From Bragg’s email:

As you probably heard yesterday, Asa (Hutchinson) and several of our statewide and federal candidates announced they will be supporting the minimum wage proposal.  We should stand behind these candidates and not let this be a distraction.  I know each of us has our own thought toward this issue, but as Jeremy mentioned in the caucus meeting, we need a united front going in to the general election.  Our focus instead should be executing our J.O.B.S. plan to create higher paying employment opportunities for those now in a minimum wage position.  Let’s stay on message about creating more opportunities through a growing economy.

A Republican Speaker of the House endorsing a Democrat to save Arkansas’s Obamacare Medicaid expansion doesn’t seem to be presenting a “united front going in to the general election.” Maybe Bragg should re-send that email.