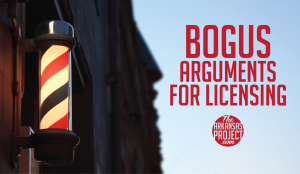 The state Senate is considering a bill that would end the state’s burdensome licensing requirements for barbers. Predictably, the people who benefit from the current system are outraged. And, just as predictably, they justify this outrage not as being in their own self-interest, but as being in the interest of the public. Too bad this justification doesn’t survive scrutiny.

KATV interviewed a barber and the director of a barber school on their thoughts about SB 104, the legislation in question. One barber said, “I don’t want somebody cutting my hair with the little bit I got without any kind of education or understanding of what’s going on.”

This barber does not seem to realize that de-licensing does not prohibit anyone from receiving an education in how to cut hair. Surely there are plenty of people who are interested in going into the business of cutting hair who would seek training before doing so. Presumably customers would look at how a barber operates to see if that person is doing a good job — some of them might even look to see what type of training a barber has. If a customer doesn’t want someone cutting his or her hair without “any kind of education,” then that person could seek out someone who has obtained such an education. A state license is not the only way to determine that.

Furthermore, barbershop owners would be free to refuse to hire anyone who didn’t have a sufficient education. However, let’s say that owner wanted to hire someone who had trained for less than 1,450 hours of barbering training. That sounds like a lot of time to learn his or her craft. Under current law, that is illegal.

Current law also mandates that barbers must be trained in a variety of functions. These include waving, bobbing, shaving, and beard trimming. If someone wants to go into business merely cutting hair, but not offer bobbing or waving services, that doesn’t matter to the state today. That person must take the state-mandated training course, even if that person never has any intention of using that knowledge. Under SB 104, someone could open a business offering a limited number of hair care services after taking training tailored for the knowledge he or she needs.

De-licensing barbers would not necessarily put any barber schools out of business. The law does not prohibit people from going to school to learn these skills; it merely ends the state mandate that a barber complete a certain number of hours prior to being able to work. To the extent that these schools are offering useful training that benefits barbers and their customers, then they will still attract students. To the extent that people were only attending them because the state forced them to do so, then they will lose students.

In the latter case, where the state is forcing people to attend these schools but attendees receive no value, then it is actually better for the economy if the schools lose customers. This type of economic activity is a drag on productivity. If barbers can shift their spending away from schooling that they are only doing because of a government mandate, they can use that money for more productive things – opening up a shop, buying supplies, etc.

Obviously, barbers have an interest in perpetuating the current licensing system – it stifles competition to them. Barber school owners also benefit financially from the current system, since it requires potential barbers to pay these schools to complete the mandatory training requirements. KATV could have done the public a service by pointing out this obvious bias. It could have also talked to experts who would explain the numerous public benefits of removing barriers to work (something we’ve written about on TAP extensively).

As barbers, barber school owners, and other self-interested individuals descend on Little Rock to oppose SB 104, legislators should look behind their rhetoric in favor of the current licensing regime. Critically thinking about what they are saying – and why they are saying it – is vital in this debate.