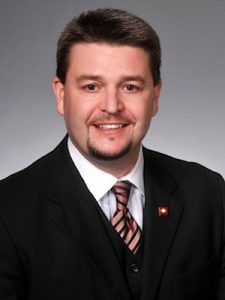 George Orwell once said that, in a time of universal deceit, telling the truth is a revolutionary act. At a Legislative Council hearing last week, Senator Jason Rapert said something revolutionary: he noted that the premises under which the state legislature approved the Arkansas version of Medicaid expansion – the “private option” – have completely changed.

We had a whole different set of rules and expectations as it related to the rollout [of Obamacare and the private option]…on the individual mandates, on the employer mandates…We have stress that has occurred already within the insurance industry in the state of Arkansas…Folks are not very happy about the fact that we have gone through all this work and put in all this time and now we are at a point where literally everything has changed.

Rapert then asked the state insurance commissioner, Jay Bradford, whether Bradford was confident in the decisions that were currently being made to implement the private option. Bradford couldn’t do it. He said he wasn’t confident, that he wasn’t in control of the constantly changing decisions about Obamacare that are being made by the federal government, and that he simply doesn’t know – as he put it – what’s coming down the pike. So much for the theory that expanding Medicaid and implementing a state-federal partnership exchange would give us “more control” over Arkansas’s destiny…

During the meeting, Rapert also said he wished that “we could focus on really the central issue around the private option, which is the fact that the [Obama] administration really didn’t want us to do that and [grant] a waiver for that.” This is Rapert’s strongly-held belief that he’s been espousing on Twitter for some time.

According to his theory, the Obama administration didn’t want Arkansas to expand Medicaid and implement Obamacare — which is kind of like saying “The kids didn’t want Santa to eat the cookies; that’s why they left them out for him, along with some milk to wash them down and a sweet, hand-written note.”  In fact, according to Rapert, the Obama administration is so terrified of the ‘private option,’ they approved it! I don’t think most people who are familiar with the genesis of the private option agree with this narrative.

After the meeting on Friday, Rapert also told reporters that he is unsure whether or not he’ll stick with the private option he helped bring to Arkansas and vote to re-authorize it in the upcoming fiscal session. This is startling. Rapert has been a consistent cheerleader for the PO and, if his recent tweets are any indication (like this one and this one and this one), that isn’t changing anytime soon.
With that said, maybe Rapert is ready to put some walk behind his talk: he also told reporters he remains “fully opposed to the Affordable Care Act, and I am even more opposed to it than I was three years ago.” I think being fully opposed to the ACA would force anyone to vote against the private option, but I’ve been wrong before. I would take Rapert’s claim a little more seriously if Rapert hadn’t voted to implement some of Obamacare’s most essential building blocks — such as Medicaid expansion and an exchange — after telling his constituents he’d work to stop it. However, I am hopeful that Rapert really means it this time and will put his tough talk into action, which at the very least means a refusal to support any further spending on the private option.

5 thoughts on “The ‘Private Option’ Debate Gets Weirder”