Well, I suppose it’s an exaggeration to call it a Christmas message – but I wanted to make a few points in response to the tart series of tweets that Senator Jason Rapert directed at me on Christmas Day: 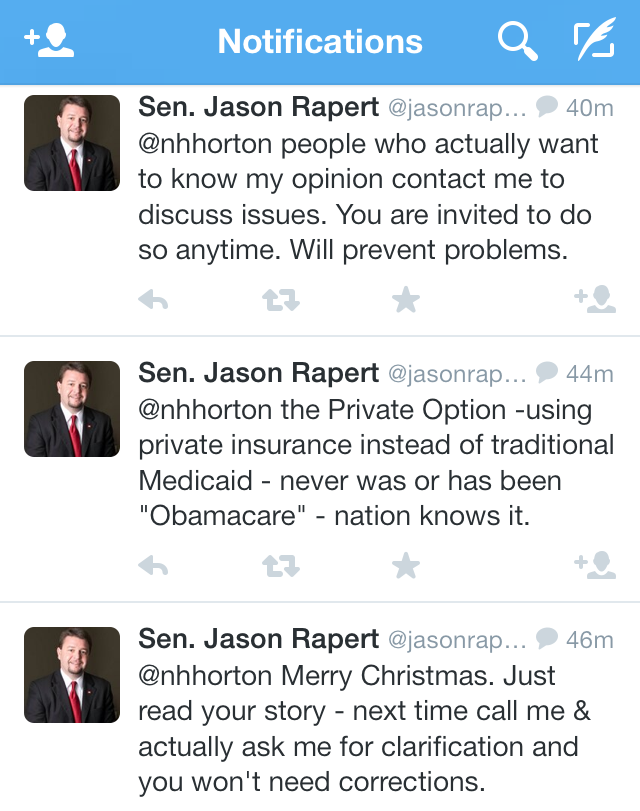 First, when Rapert suggests that my Tuesday post will “need corrections,” it seems only fair for him to explain what the needed corrections are. But that explanation is absent – and it isn’t clear to me that his suggestion that “corrections” are needed is anything more than bluster. In fact, I suspect that Rapert’s objection is not that my story was, in any way, incorrect; I reported exactly what he said. Rather, I think he is upset that our opinions about the private option differ from his. Someone who demands corrections solely on the basis of a difference of opinion is on shaky ground.
Second, it’s absurd to insist that the “nation knows” much of anything at all about Medicaid. On the contrary: I suspect that widespread public ignorance about the details of Medicaid is precisely what allows government officials – on both sides of the aisle – to make unusual and insupportable claims about how Medicaid works.
Third, I am afraid that Rapert’s statements about Medicaid fall directly into this category of “unusual and insupportable claims.” Rapert has a right to his opinion, of course; it’s just that his opinion doesn’t seem to be supported by actual facts or mainstream conservative judgment. Of course a central aspect of Obamacare is the expansion of Medicaid. Of course the expansion of Medicaid is exactly what the private option accomplishes. Rapert’s wordplay involving the private option – such as insisting that it is “using private insurance instead of traditional Medicaid,” or insisting that it “never was or has been Obamacare” – obscures more than it illuminates. Such statements obscure the reality of Medicaid because, among other reasons, the private option delivers Medicaid benefits. The private option does not offer the same kind of benefits that a competitive market in private insurance does, and therefore to insist that the private option substitutes private insurance for traditional Medicaid is, at best, misleading. That is because, with respect to the care that its beneficiaries receive, the private option is not inherently different from Medicaid, nor is it some sort of challenge to Medicaid; rather, the private option is simply Medicaid that is administered differently and given a different label. The private option operates under exactly the same section of federal law that every other Medicaid program is authorized by – Section XIX of the Social Security Act – which is the title reserved for the Medicaid program. Furthermore, the federal government has said expressly that private-option enrollees “remain Medicaid beneficiaries” and that they will receive Medicaid benefits. The idea that Medicaid stops being Medicaid when its administration changes doesn’t pass the straight-face test; nationally, the vast majority of Medicaid beneficiaries are on managed-care plans, but there is no dispute (among reasonable people, anyway) that those beneficiaries are still on Medicaid.
Fourth, Rapert explains that “people who actually want to know my opinion” will contact him personally. Well, the dark arts of journalism actually provide an even more efficient way to know Rapert’s opinion: a journalist might, for instance, report on what Rapert says when Rapert speaks at official government functions (as he did on Friday, and as we reported on earlier this week). Rapert’s suggestion that I am somehow obliged to ignore his extensive remarks at public hearings, and instead that I need to interview him personally in order to verify his true opinion, is mistaken. (Rapert is not the first state legislator to explain to us at The Arkansas Project that we can’t rely on what he says in public; we find this view to be not only wrong, but also startling in its implications.)
I want to close by extending the same offer to Rapert that we make to any public official we criticize on this website: if you don’t like what we’ve said, by all means write us a response and we’ll post it here. (Within reason, of course: we won’t run a response that incites imminent lawless action, contains threats or obscenities, is libelous, et cetera. Unless, of course, that response is extremely witty.) I think most people will find Rapert’s rhetorical stance – tweeting to me that “I just thought you might actually like using accuracy on issues in your blog – my mistake” – unconvincing, especially as long as he studiously avoids any discussion of any possible inaccuracies. We therefore invite him to explain himself, albeit at a length greater than 140 characters. Senator Rapert is a fine legislator and I still have faith that he means what he says when he explains that he is “fully opposed to the Affordable Care Act, and I am even more opposed to it than I was three years ago.” But I also believe that anyone who is fully opposed to the Affordable Care Act would take pains to ensure that it is not institutionalized in Arkansas. As other state senators have noted, the day-by-day changes in Obamacare have eliminated many of the justifications for the private option. To repeat what I said earlier this week, I think the inescapable implication of Rapert’s statement is a flat refusal to vote for any further spending on the private option in the fiscal session of 2014 – and I look forward to Rapert’s actions being consistent with his anti-Obamacare principles.