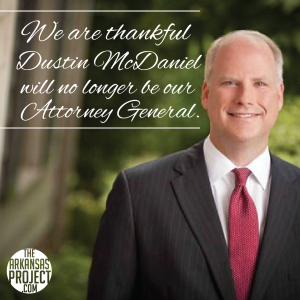 After the state Claims Commission voted unanimously to award Buckley $430,000 for the miscarriage of justice he suffered, Attorney General Dustin McDaniel announced that he would oppose that decision when it came time for the state legislature to approve it. At the state legislative committee, McDaniel alleged that Buckley was a career criminal, saying “Gyronne Buckley was a crack dealer in Arkadelphia. He had a long criminal history and he sold crack cocaine to undercover informants repeatedly.” McDaniel also called Buckley “a general bad guy.” Such reckless rhetoric is indefensible: Buckley was the victim of a rigged trial, and the single conviction which resulted from it was reversed by the Supreme Court and expunged. Buckley has no criminal record, with the exception of one fight in high school. McDaniel repeatedly made baseless assertions about Buckley’s criminal history; when we asked if he had any evidence for such charges, he declined to provide them. A competent and conscientious public servant would never have made the charges that McDaniel made to the legislative committee.

McDaniel’s behavior in that case was disgraceful. He didn’t just manufacture crimes that Buckley never committed while speaking to the legislators charged to produce a verdict; he also manufactured statements that Buckley never made in the course of misrepresenting Buckley’s circumstances. When McDaniel was caught in the act of misrepresentation, he responded “I was quoting Mr. Buckley, though I did misquote him.” Of course, it is important to note that McDaniel publicly conceded that he misrepresented the facts to the compensation committee only after he successfully misled that committee into denying compensation.
Dustin McDaniel’s public tenure, in short, has been a horror. I am quite thankful that his tenure as a public official is approaching its end. In a recent interview, he said he likely wouldn’t run for office for “at least a decade.” I’ll be even more thankful if the response of the voters is “I’ll see you and raise you.”

One thought on “Thankful McDaniel's Tenure Is Ending”