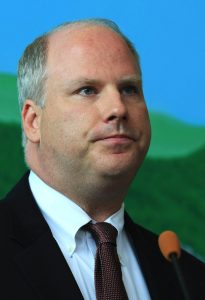 The attorney general of Arkansas doesn’t get to write laws or make policy for the state. However, as the state’s highest ranking law enforcement officer, it is customary for the AG to issue opinions on legal questions, usually when asked to do so by lawmakers. I don’t have a problem with this in general, as long as we all understand that opinions from the AG are just that — his opinion. They’re not decrees, verdicts, or rulings. They’re just one lawyer’s opinion of the law.
Imagine my dismay, then, when I read this headline Thursday night: “Ark. AG Dustin McDaniel: Schools can’t arm teachers, staff.” I mean, that’s McDaniel’s opinion, sure. But he can’t actually make that decision for every school district in the state — unless, of course, they let him.
Further dismay set in today when I read this report stating that the Arkansas State Police are putting holds on requests for licenses that would allow school districts to act as a security agency and arm teachers to protect students.
But wait, there’s more: you may not know that 13 of these licenses already exist in schools across the state. In fact, the Lake Hamilton school district has had its license for 25 years. (No reported incidences of teacher shootings, in case you’re wondering.) After the McDaniel “ruling,” the state police is reconsidering the issuance of these existing licenses. 25 years. A quarter of a century. No incidences of teacher or criminal shooting sprees — just safe students. Now some lawyer in Little Rock says they can’t and, despite the fact that his opinion has no legal force, these schools may have their licenses yanked. This will make Arkansas schools less safe. Shame on Dustin McDaniel.
As for the the opinion, it was requested by Rep. Hank Wilkins — you know, that guy whose wife twice violated Act 34, which he sponsored. McDaniel said he issued the opinion in an expedited fashion because of the impending start of the new school year. As for its substance, Steve Jones of Arkansas Carry said it is inconsistent with other recent McDaniel ‘decrees:’

Dustin McDaniel uses broad definitions in some opinions to push anti-gun agendas, and conversely uses very narrow definitions to further the same cause.  In today’s opinion he defined the word “entity” to be a “private” business or person, and does so to push his anti-gun plan on the Clarksville School District. However, McDaniel had previously declared that a city is an entity just two months ago in Opinion 2013-013, when stating that entities could put up signs banning concealed carry.
Gun-grabbers like McDaniel change their dictionary as needed to keep our rights from us while never coming close to real liberty for the people (as seen by McDaniel’s horrible official opinion on the journey law last month).

Whaddya know: Jones is correct. In his May 1 Opinion (2013-013), McDaniel clearly states that “any ‘entity’ – a category I believe includes a city[2] – may at its discretion bar carrying concealed weapons on any ‘place’ over which it ‘exercis[es] control.” Therefore, since a city is an ‘entity,’ it can post signs and deny 2nd Amendment rights.
So, if a city — a public institution — qualifies as an ‘entity,’ why doesn’t a public school? Well, because Dustin McDaniel says so!
In his most recent opinion (2013-091), McDaniel redefines ‘entity’ in a much more restrictive way. To get there, McDaniel defines “person” as an “entity.” Then, he says that a “ ‘person’ in this definition as restricted in meaning to a point that cannot accommodate a classically public entity such as a school district. A public school district, as the designation itself implies, is a profoundly public, rather than private, entity.”
To recap: in May, when suppressing gun rights, a public institution qualified as an ‘entity.’ In August, when expanded security and gun rights are the question, ‘entity’ can only mean a ‘private’ business.
Don’t be alarmed, however: McDaniel assures us that he’s using “standard principles of statutory construction” when defining a “person.” This policy is apparently as much as two months old.
It’s disturbing to see Dustin McDaniel use the law — inconsistently — to carry out what I think Jones correctly identifies as an anti-gun agenda. It’s also disturbing to see school districts and the state police bow to McDaniel’s wishes, despite the fact that he has no real authority to set policy for them. But most of all, it’s very disturbing to know that, because of McDaniel’s political games, kids in Arkansas schools will be less safe. I hope the legislature will clear up any ambiguity that may exist in the law and firmly assert the rights of schools to protect students from crazed criminals who don’t follow the law — and who, by the way, don’t listen to Dustin McDaniel.