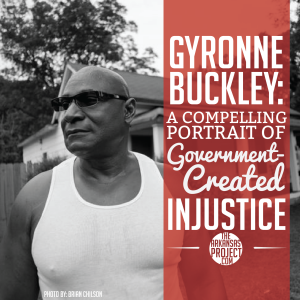 A few days ago, David Koon published an excellent article in the Arkansas Times on the Gyronne Buckley scandal – which is to say, the scandalous response of Arkansas public officials to the injuries its agents inflicted on Buckley. (The state Claims Commission found that Buckley was the victim of fabricated evidence from a corrupt cop; Buckley served over a decade behind bars before the state Supreme Court determined in 2010 that he had been subject to an unfair trial, which ultimately led to the expungement of his sentence.) Koon’s piece digs deep into Buckley’s case; his article deserves reading and rereading.
The Buckley scandal is factually complex. If Koon had explained the legal and moral significance of every fact he laid out, his already extensive article would have been two or three times as long. (This is probably true for our previous articles covering the Buckley scandal as well.) Our previous articles didn’t mention several items Koon covered that are highly relevant to the Buckley scandal, and I think it’s worthwhile to highlight a few of the most important points Koon made.
There is reason to believe that Buckley was the victim of tainted, police-created evidence. The Arkansas Times visited the site where law-enforcement officers allegedly observed Buckley reaching into a cocaine-stash hiding place. Buckley’s home (and, more precisely, the location of the alleged stash site) is roughly 240 yards away; any events there would be nearly impossible to discern – even with a telephoto lens – both because of the distance and because of an intervening privacy fence. Buckley went to jail based on the police work of Keith Ray, the lead investigator in Buckley’s case, who later admitted in federal court that he lied under oath about other criminal defendants and that he targeted black people in his drug investigations. To put it another way, there are multiple reasons to believe that the police witnesses in the case didn’t see what they told the court they saw.
Furthermore, after eleven years behind bars, Buckley refused to accept a spectacularly favorable plea deal. Once the state Supreme Court ruled that Buckley deserved a new trial after he had spent over a decade behind bars, Larry Jegley (the special prosecutor in the case) – who believed that Buckley had already served enough time – offered him an extraordinary plea bargain. Buckley would receive immediate release from prison in exchange for a guilty plea, and his post-prison life as a free citizen could begin. Buckley rejected the offer, defying the advice of everyone in his life to accept it. After more than a decade of nightmarish mistreatment by Arkansas’s criminal justice system, it is hard to understand what could have motivated him to refuse this deal other than an unremitting belief in his own innocence. (Shortly after Buckley refused to accept the plea offer, Jegley decided that a retrial would have been pointless and dropped the charges; later that year, Buckley’s record was expunged.)
Our attorney general will misrepresent facts when it suits him. After the state Claims Commission voted unanimously to award Buckley $430,000 for the miscarriage of justice he suffered, Attorney General Dustin McDaniel announced that he would oppose that decision when it came time for the state legislature to approve it. At the state legislative committee, McDaniel alleged that Buckley was a career criminal, saying “Gyronne Buckley was a crack dealer in Arkadelphia. He had a long criminal history and he sold crack cocaine to undercover informants repeatedly.” McDaniel also called Buckley “a general bad guy.” Such reckless rhetoric is indefensible: Buckley was the victim of a rigged trial, and the single conviction which resulted from it was reversed by the Supreme Court and expunged. Buckley has no criminal record, with the exception of one fight in high school. McDaniel repeatedly made baseless assertions about Buckley’s criminal history; when we asked if he had any evidence for such charges, he declined to provide them. A competent and conscientious public servant would never have made the charges that McDaniel made to the legislative committee.
Our attorney general will race-bait when it suits him. McDaniel also told the state legislature that the taped surveillance contained audio of Buckley “making threats to kill whitey for whatever police action may come against him and all that kind of stuff.” The tape contains no such statement; the “threats to kill whitey” apparently are a function of McDaniel’s rich fantasy life. (Buckley does make a statement about “white folks” in the recording, but there is no reasonable interpretation of it that ties it to anything like threats or violence from Buckley.) Koon provides a quote from Buckley’s appellate lawyer, Tom Sullivan, who says that he thinks McDaniel “was playing the race card.” McDaniel responded to Sullivan’s accusation with ersatz and subjunctive outrage:

“I would be deeply offended if anyone were to suggest I was attempting to race-bait anyone … That’s not my record, that’s not my person, that’s not who I am. I didn’t make up the word. I was quoting Mr. Buckley, though I did misquote him.”

It is hard to know how to understand McDaniel’s haystack of verbiage or the needle of admission inside of it – except to note that to the extent that McDaniel is actually “deeply offended” by Sullivan’s suggestion, I think such offense is richly deserved.
Our attorney general either doesn’t understand, or pretends not to understand, some basic building blocks of the legal system. McDaniel argued before the legislative committee that wrongful conviction and actual innocence are not the same thing, noting that no court has ever found Buckley not guilty of the offense with which he was charged.

Well, let’s be even more clear. We live in a system where defendants are innocent until proven guilty. Our state’s highest court reversed Buckley’s conviction. When a special prosecutor presented Buckley with a time-served offer in exchange for a guilty plea, Buckley refused, continuing to profess his innocence. When the state dropped its case and set Buckley free, his record was expunged – which means, as a matter of law, that the conviction never happened. The criminal defense system isn’t set up to prove innocence, but it is hard to see what series of events might present stronger evidence of innocence than this one.
Similarly, McDaniel attempted to explain that Keith Ray’s involvement in Buckley’s case was irrelevant to any determination of government misconduct, explaining that Ray’s involvement didn’t demonstrate Buckley’s innocence and adding: “It certainly doesn’t mean there was any evidence fabricated in this particular case.” McDaniel added that Ray’s involvement was “pure luck.” (I can only respond that I wouldn’t wish this kind of “pure luck” on my worst enemy.)
McDaniel’s ham-fisted attempts to shift the burden of proof, and his blustering insistence on Buckley’s guilt, are disastrously mistaken on multiple levels. First, McDaniel ignores that (to repeat myself) the court finding that Buckley was guilty rested on tainted evidence – because there is reason to believe that the evidence that led to the verdict was manufactured by agents of the prosecution. Second, Buckley can’t prove, and isn’t required to prove, actual innocence as a legal matter – because, in the American system of justice, there is no place you can go for official recognition of such a claim. Finally, McDaniel is just wrong on the facts: Buckley’s lawyers attempted to argue that he was factually innocent, but were told that the legislative committee was just too busy to hear what they wanted to say. And of course Buckley claimed that he was actually innocent – that’s why he didn’t take a plea that would have let him walk out of prison a free man.
Sovereign immunity should never be a conversation-stopper. Koon touches on the politics that are hidden beneath an award from state government: namely, every dollar of compensation has to come from someone’s budget. Previously, when Ray’s corruption led to the wrongful conviction of Rodney Bragg, the compensation that the state paid out to Bragg came out of a state fund for the salaries of deputy prosecutors. As Koon points out, some would argue that it is unfair to take money out of prosecutors’ budgets generally unless all the prosecutors are misbehaving.
This view implies a disturbing misunderstanding of citizens’ rights and government responsibilities. Any argument that it is unfair to cut government budgets in order to compensate the victims of government’s bad acts implies that government should never compensate those who it harms, or perhaps that government can do no wrong. In fact, when government harms the people that it is charged to protect, it is simple justice that government should compensate them. The suggestion that government is behaving responsibly when it refuses to compensate those who it has harmed is an unsettling idea and a ticket to limitless government power. In fact, budget reductions that are triggered by misbehaving government agents regulate government and protect citizens; making government budgeters pay the bill for government wrongdoing is probably the only way to deter government from violating the rights of the people. In other words, if we’re going to compensate people, the money has to come from somewhere.
In any case, I think it’s a huge mistake to argue that compensating victims with $200,000 of public money has to blow a hole in any state budget, especially given the nearly-unregulated cornucopia of public money that the attorney general distributes regularly. Indeed, by the sheerest of coincidences, the office of the attorney general just demonstrated that it routinely gives out hundreds of thousands of dollars that it literally doesn’t know what to do with. I would take the complaints of a cash-strapped state government more seriously if we didn’t have the embarrassing spectacle of an attorney general spending public money on vanity projects.
To sum up: David Koon’s article on Buckley is worth taking time to read. It’s a compelling portrait of government-created injustice, and in particular it sheds light on how casual and careless our attorney general has been in protecting Gyronne Buckley’s fundamental rights as a citizen. (Indeed, to describe Dustin McDaniel’s behavior as casual and careless is probably too generous.) Koon’s exploration of the Buckley scandal is thoughtful and provocative: for Arkansas citizens, it’s required reading.

2 thoughts on “This Week’s McDaniel Scandal”