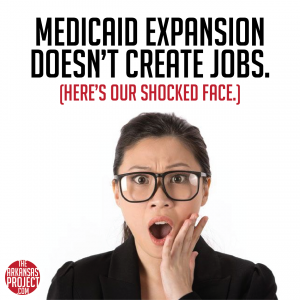 One of the many dubious claims about the “private option” Medicaid expansion was that it would be a “job creator” for the health-care industry in Arkansas.
Proponents of the plan seemed to reason that the “private option” Medicaid expansion would give more able-bodied, childless adults health insurance, which would increase revenue to hospitals and result in hospitals hiring people for more jobs. “Free” money is an amazing thing!
Here’s big-time Advance Arkansas Institute fan and Arkansas Hospital Association lobbyist Jodiane Tritt, passing out talking points to supporters at the beginning of the fiscal session in January 2014:

The Private Option can create much-needed jobs across Arkansas.  Studies have found that the Private Option will result in an increase of approximately 8,600 new jobs in 2014 and 10,600 new jobs by 2020.
These jobs will not only be in hospitals, clinics, nursing and other health facilities, but also in those industries that support the Arkansas health care industry. Our communities will benefit from increases in wages and earnings.

Surely hospital lobbyists would never mislead the legislature about something so important! Imagine my shock earlier today, when I read an article in Modern Healthcare with the headline: “Economists find no evidence that Medicaid expansion adds healthcare jobs.”
From Modern Healthcare:

Expanding Medicaid does not appear to have fueled healthcare employment in states that raised eligibility and accepted billions of dollars in additional federal matching funds for their programs under the healthcare reform law.
U.S. healthcare employment began to accelerate after the first three months of the year and the uptick caught the attention of economists with the Altarum Institute, who conducted the analysis to determine whether hiring grew faster in Medicaid expansion states. It did not, they found. In fact, growth was faster in states that did not expand Medicaid, said Ani Turner, deputy director of Altarum’s Center for Sustainable Health Spending.
Proponents of expansion have touted the economic benefits of increased Medicaid enrollment, as they make their case to reluctant state governors and lawmakers. Indeed, hospitals in states that expanded eligibility are seeing less bad debt and fewer uninsured patients. But it might become harder to argue that Medicaid expansion is a jobs engine if the numbers don’t bear it out.

In addition, states that did not expand Medicaid (unlike Arkansas) have seen more robust overall job growth, according to one economist quoted in the article.
To recap: this is just the latest example of a claim by “private option” Medicaid expansion  proponents that has turned out to be false. They said it would save rural hospitals. That turned out to be false for Crittenden Regional Hospital. They said it wouldn’t be more expensive than traditional Medicaid expansion. The Government Accountability Office (GAO) says that’s false, too. Sadly, this latest example of Medicaid expansion failing to create jobs is just another example of the optimistic promises “private option” proponents made that never materialized.

One thought on “Another PO Broken Promise: Medicaid Expansion Not A Job Creator”