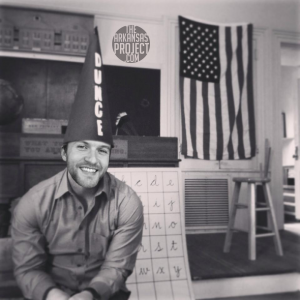 Unfortunately for Pearson, his claims about HB 1042 are completely insupportable.
First, this mailer is an example of how American higher education has failed our young people. Pearson, 28, has a master’s degree, but he doesn’t seem to realize that as a state Senator, you can’t actually vote on a bill unless it actually makes it to the…state Senate. Apparently, such esoteric legislative nuances aren’t taught at the Clinton School.
Second (and more importantly), HB 1042 doesn’t change eminent domain law for pipelines at all. If you read the bill, you can see it prohibits forced transfers from one private property owner to another, but doesn’t affect public use rules (such as those which govern pipelines) at all. It is a bill that shrinks government’s powers of eminent domain; when Pearson attacks Rapert for expanding eminent domain, all that is demonstrated is that Pearson can’t shoot straight.
(In other words, the bill expressly states that, although it attempts to change some parts of eminent domain law, it leaves the portion of eminent domain law that deals with pipelines unchanged. Pearson is therefore criticizing Rapert for something Rapert never did.)
Pearson’s mailer also criticizes Rapert for not throwing more taxpayer money at our already bloated higher education system. However, the fact that we have a Clinton School graduate who lacks the competence to read and understand a two-page bill suggests a reality that many of us don’t like to think about: namely, some people have problems of comprehension that no amount of higher education will ever fix.
The fact that Pearson is making claims about HB 1042 that the bill won’t support is a bit of a danger sign. Word has it that part of the job over there in the Senate involves reading and understanding bills.