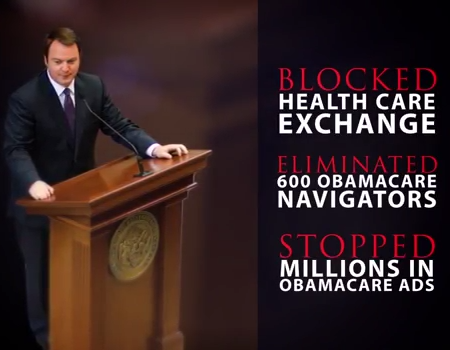 State Rep. John Burris is seeking a seat in the state Senate. The seat was vacated by outgoing Senator Johnny Key (Key elected not to run for another term, and instead pursue a gig as a lobbyist for the U of A). If Burris is to be the next Senator from District 17, he’ll have to top two Republican challengers — businessman Scott Flippo and Mountain Home Mayor Dave Osmon.
Naturally, a three-way primary lends itself to a robust debate. Much of that debate has centered around Burris’s support for the Obamacare “private” option during this primary: Burris was the primary House sponsor of the law last legislative session, leading to some mailers into the district. Perhaps in response to these tactics, Burris has now released a TV ad that paints him as a fighter, not an enabler, of Obamacare in Arkansas.
The voiceover says that Burris “fought to stop Obamacare.” In addition, the text in the ad says Burris “blocked healthcare exchange.” But the legislative history, chronicled on the legislature’s website, tells quite a different story.
In 2013, Rep. Mark Biviano sponsored HB1508, a bill to set up the “Arkansas Health Insurance Marketplace” — also known as the Obamacare health insurance exchange. If you just watch Rep. Burris’s television ad, you’d probably think that Burris opposed this bill. But he didn’t: he voted for it.
So why did Burris say he blocked the exchange, when in fact he voted for it?
If Burris were pressed to explain this claim, I suspect he would say that he worked to “block the healthcare exchange” in the 2011 session and during the interim in 2012. And that’s true; he did. However, why should Burris get credit for those earlier votes to block the exchange but not the later, more recent vote to implement the exchange? It’s kind of like John Kerry being for the Iraq War before he was against it. Lawmakers are entitled to change their minds, but they’re not entitled to change history.
The big question here is: what changed between December of 2012 — when Republicans, including Burris, were still fighting the exchange — and Spring of 2013? Why did Republican leaders turn from principled fighters of the law into capitulators?
Again, I’m speculating a little bit — since Burris hasn’t returned my request for comment — but I would bet his answer would be similar to Rep. Biviano’s in this interview from last year:

What’s changed since then obviously is re-election of the president, the Supreme Court upheld the decision, and so there’s nothing we can do to stop implementation of the law. That’s going forward.

(If Burris has another, better explanation for why his position changed, he is still welcome to send me a statement.)
The problem with the Biviano line, however, is that the December 2012 meeting of the legislative council was after the presidential election and after the Supreme Court ruling — and Republicans were still fighting Obamacare.
The real shift in GOP legislative attitudes on Obamacare happened in February of 2013 when Governor Beebe announced he had obtained approval (which really just turned out to be a suggestion) from Kathleen Sebelius for Arkansas to pursue the “private” option. In fact, Beebe made his triumphal re-entry into the state on February 26th. The next day, February 27th, bright and early, Biviano filed his exchange bill.
And I think that’s really the key to this whole thing: the “private” option plans are purchased through the Obamacare exchange. Legislators needed the exchange, stat, so they could implement the PO. Republican supporters of the Arkansas Obamacare plan can spin all they want to about how the PO has “nothing to do with Obamacare,” yadda yadda yadda. But the bottom line is that, when they invested in the Medicaid “private” option, they truly became invested in Obamacare and, for better or for worse, John Burris was a big part of that.

3 thoughts on “John Burris: Against The Obamacare Exchange Before He Was For It”