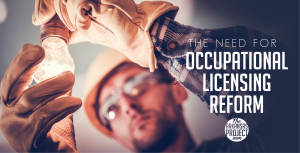 Arkansas may be on the path to reforming its burdensome occupational licensing laws. Governor Asa Hutchinson formed a Red Tape Reduction Working Group that is set to issue a report later this year about reforming licensure in the state. That is a good first step to removing unnecessary barriers to workers looking to enter a variety of jobs.

In a recent op-ed for the Democrat-Gazette, Brian Kanode of the Arkansas Center for Research in Economics (ACRE) at the University of Central Arkansas has some good advice for the members of that group. He notes the importance of this issue to workers and consumers in Arkansas:

High barriers to entry decrease employment. With less competition, whoever the government allows to work can charge higher prices. This leaves both would-be practitioners and consumers worse off. If we want to improve Arkansans’ lives, we can start by enacting serious licensing reform. The best targets for reform are licenses that have high barriers to entry and aren’t protecting consumer safety.

Kanode goes on to make the point that the first step in evaluating licenses should be to determine if they protect consumer safety:

To know if there is a reasonable threat to consumers, we need to get a better understanding of the dangers. What’s the most harm that an unlicensed professional can inflict on the public? We also need to know the probability that these harms will occur. Finally, if the licensing process actually mitigates harm.

Then, he says, licensing rules should be evaluated to see if they impose a barrier for workers to enter an occupation. He points out how Arizona is doing that:

A 2017 executive order by Arizona Gov. Doug Ducey required licensing boards to supply the requirements for their licenses. These requirements were then compared against the national averages. If Arizona’s were higher, then the governor asked the licensing board to justify the rule. The same is true if fewer than 24 states licensed the occupation. This is not a radical suggestion. If half of the U.S. is doing fine without a rule, why would we burden Arkansans with it?

Occupational licensing reform is something that has long interested AAI. In 2016, then-AAI President Dan Greenberg and I wrote a paper on how the state’s licensing regime kills jobs and discourages honest work. TAP has also focused on this issue extensively.

There is a growing consensus across the political spectrum that occupational licensing laws need to be reviewed and, in many instances, scaled back. Let’s hope the members of the governor’s working group take their jobs seriously and listen to the advice of experts like Brian Kanode. If they take steps to reform these onerous laws, then the state’s workers and consumers could see big benefits.

(For the purposes of full disclosure, I should note that I am working with ACRE on an occupational licensing project.)