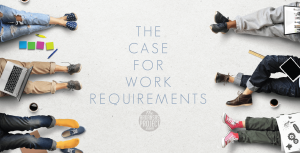 The work requirement for some Arkansas Medicaid recipients is in the news.

Not surprisingly, there is still controversy about it. There is a lot of worry about those who may be dropped from the program because they don’t comply with the state’s rules. There may indeed be ways for the state to improve how it monitors the work requirement. If these technical issues are the only objection, then they can be fixed as the program continues to be implemented. But what about the larger objection that it is somehow unfair or ineffective to impose a work requirement?

Those interested in these questions should check out a presentation by Robert Doar of the American Enterprise Institute. He lays out the case for work requirements in the federal farm bill, but the logic applies equally to Medicaid:

Managing government safety-net programs also made it clear that the only way out of poverty is through earnings. SNAP and other safety net programs can and do reduce material hardship, but for non-workers, receiving support from such programs alone is not enough to raise incomes above the poverty line. If people are to escape poverty, earnings must be part of the equation. Those of us in favor of work requirements are also in favor of work supports that combined with earnings from jobs have brought millions of Americans out of poverty, and could do even more in the future.

In experiments in Milwaukee, and Oregon, labor force participation rates increased (which should be a central goal in our current state of near-full employment), wages increased, and child poverty decreased as a result of work-first initiatives for welfare recipients.

But the best evidence we have for the success of work requirements is the dramatic national increase of about 15 percentage points in labor force participation among never-married mothers (from about 45 percent to about 60 percent) in the aftermath of 1996 Welfare Reform, which added work requirements to our cash welfare system.

Arkansas is a pioneer when it comes to a Medicaid work requirement. There will obviously be problems with the implementation of any government program. But Arkansans shouldn’t let these issues stand in the way of a tweak to the Medicaid program that could prove to be a good way to help move people out of poverty and into the workforce.