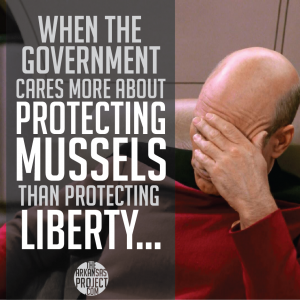 Arkansas can expect shrunken property rights — and more taxpayer dollars spent on lawsuits against private landowners — if a federal critical habitat designation goes into effect as expected later this year.
In 2013, the U.S. Fish and Wildlife Service (FWS) announced its plan to designate the Neosho Mucket as an endangered species and the Rabbitsfoot Mussel as a threatened species. The FWS also created a new critical habitat area that would add burdensome federal regulations on private landowners near areas that (according to the U.S. Fish and Wildlife Service) contain those two species.
Jeff Sikes, legislative director for the Association of Arkansas Counties, said at a joint state committee meeting Monday that FWS head officials currently have an “ends justify the means” philosophy when it comes to enforcing the Endangered Species Act (ESA) at the expense of property owners and taxpayers.
The upshot: property rights will shrink in the proposed critical habitat area.
Sikes said:

They are going to pass rules that have the potential for tremendous impact on private property owners, but they are not going to tell you exactly all of that. They are going to let you find out the hard way…when you get sued or the service gets sued and they come back and force you to do something that you don’t want to do to your property. I just think, personally, that’s kind of offensive to me. It’s kind of like you think so little of the taxpayer that you had to mislead them into doing the right thing.

This would be a more complete and in-depth economic study that we feel like has to be done before we can just go out indiscriminately and start designating critical habitat areas and not take into consideration how it’s going to affect lives and livelihoods in those areas. Something isn’t right when a government agency can make decisions without considering the full cost to all involved.

However, people shouldn’t get their hopes up that the legislation amending the ESA will be passed into law. According to the Washington Examiner, the ESA has not been amended by Congress since 1988.
The proposed critical habitat designation applies to approximately 700 miles of rivers and streams extending over 31 counties in Arkansas.
Ninety percent of those river miles pass through private property: they’d be subject to federal critical habitat regulations, according to Veach.
To get an idea of how some of these ESA decisions end up affecting the average citizen that Washington D.C. bureaucrats tend to forget about, one only needs to look at Kansas: its prairie chicken was declared a threatened species in March.

Like countless others in Western Kansas, Randa’s job has been upended by a U.S. Fish and Wildlife Service move to list the small grouse as a threatened species. With the March decision came new rules, regulations, and the threat of fines for disturbing the bird.
While folks in the oil and gas industry are now restricted where they can work — it costs as much as $45,000 in fines to tear up a single acre of lesser prairie chicken habitat — it goes beyond that. Randa, who works for Mull Drilling of Ness City, used to start his days by 6 a.m. or earlier, but now he and other oil patch workers are barred from going anywhere near a rig before 9 a.m
“It’s going to change our lifestyle, how we operate,” Randa told Kansas Watchdog. “They’re trying to set the hours you can work, they’re going to restrict where you can and where you can’t work. We don’t work from 9-5.”

Maybe after they are done protecting the Neosho mucket, the U.S. Fish and Wildlife Service can begin thinking about economic freedom and private property rights — two important matters that will definitely be on the threatened species list once this critical habitat designation goes into effect.