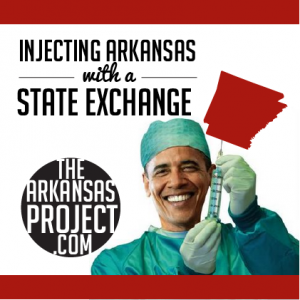 Last week, I began investigating whether Arkansas was moving towards a state-run Obamacare exchange. My initial interest in this story emerged after several state lawmakers told me they were hearing rumblings that the state’s Obamacare bureaucracy was looking at expediting our move to a state-based exchange. This troubled me because, as I read the existing law, I realized the exchange is not supposed to make the switch until next summer: Act 1500, the authorizing statute for the exchange, specifically says the exchange “shall transfer to the control of the Arkansas Health Insurance Marketplace on July 1, 2015.” Not in August of 2014; not in January of 2015, but on July 1, 2015.
Senator David Sanders told me my interpretation of the statute was wrong and questioned my reading ability. He said it’s up to the exchange to decide for themselves whether they will change to a state-based model, and when they will do it. You can read Act 1500 here and decide if you agree with my interpretation or Sanders’s.
During my research, I also spoke with Cheryl Smith, the director of the federal “partnership” exchange that Arkansas is currently using. Because of Sanders’s comments and Smith’s comments at a recent hearing, it seems clear to me that the state is taking steps towards a state exchange — including applying for a $133 million grant that will go towards “planning” for the state exchange. What’s unclear is if they’re taking the steps they always planned to take at this time, or if — in the wake of the Halbig ruling — the state bureaucracy is attempting to expedite the process.
I asked Smith directly if the state was preparing to move up the timeline. The right answer seemed simple enough to me (assuming there’s nothing going on behind the scenes to speed up the process). Maybe something like “We would never, ever consider exceeding our statutory authority in order to speed up the implementation of Obamacare.” (Hey, a guy can dream.) But Smith was far from definitive in her response:

That determination of whether and when the state will transition has yet to be made. The AHIM Board is committed to a thoughtful, deliberative collaboration throughout the decision making process. The next AHIM Board meeting is scheduled for August 11, 2014. You are more than welcome to attend to see where the AHIM Board is in the process.

After I asked her to elaborate, Smith deflected again:

The determination of whether and when the state will transition to a SBM has yet to be made — thus, there is currently no “timeline” to move.

So I guess Arkansas taxpayers will just have to wait and see what the unelected bureaucrats decide. If you’re interested in learning more, you can attend the exchange board’s meeting on Monday, as Smith suggested. Full details are here.
It seems clear, at least to me, that state law prohibits the board from moving up the timeline for moving to a state exchange. But it also seems clear that — at least according to the Bureau of Legislative Research — there’s not really anything the legislature can do to stop them until the next session rolls around in January. So taxpayers will have to just have to cross their fingers and hope that the people who are being paid to save Obamacare will fail.
Rep. Joe Farrersaid it well last week: the legislature made a serious mistake in passing Act 1500 and relegating so much authority to a board of unelected, unaccountable bureaucrats. Here’s hoping they work towards a better answer in the upcoming session.