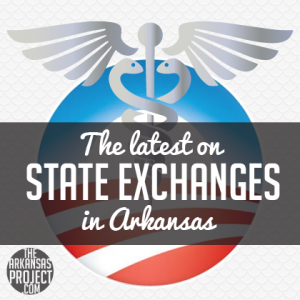 Yesterday, I wrote about the steps Arkansas is taking to set up a state-based Obamacare exchange. The Halbig decision presents a huge opportunity for states to protect their residents and employers from the devastating mandates in Obamacare. Let’s explore.
Based on the logic of Halbig, any state which declines to implement a state Obamacare exchange would free its residents from the individual mandate and its employers from the employer mandate. This is because the Obamacare mandates are triggered by the Obamacare subsidies. Plain and simple: if the subsidies aren’t flowing, the mandates can’t take effect.
(Of course, state lawmakers were told this in 2013 before they passed the bill to set up the exchange.)
A Cato Institute report estimates that, if Arkansas stayed on the federal exchange, nearly 130,000 individuals and over 760,000 Arkansas employees would be freed from the Obamacare mandates. So staying on the federal exchange is, to coin a phrase, a “no brainer.” But, as I wrote yesterday, the legal authority is already in place for Arkansas to transition from a federal exchange to a state exchange, thanks to the work of Rep. Biviano and Sen. Dismang.
(And there are many other reasons a state-based exchange is a bad idea.)
A new memo from the state’s Bureau of Legislative Research reveals that there’s little the legislature can do to stop the creation of a state exchange in the interim because of that law. Here’s what BLR’s Jessica Beel said:

In the interim, little can be done to stop the Ark HIM from becoming a state-based marketplace or applying for/receiving federal grant funding . . . The committee has also made suggestions or recommendations to the Ark HIM in past based upon Act 1500 of 2013.

But the upcoming session will provide an opportunity for the legislature to intervene and change the state’s trajectory:

However, in order to effectively stop the Ark HIM from becoming a state-based marketplace, legislative action would need to take place in the upcoming Regular Session to amend or repeal Act 1500 of 2013.

So conservatives should expect to see adamantly “anti-Obamacare” legislators (as Senator David Sanders claims to be) lining up to voice their support for legislative changes to block a state exchange, right? Well, not exactly.
I talked to Sanders yesterday about this very topic. He agreed with me that, if Halbig holds, it will block the individual mandate and the employer mandate in Arkansas:

Yeah, potentially. You’re right. If it works out. So, obviously, that’s one way to do it.

But, for some reason, he declined to voice his support for amending state law and keeping Arkansas on the federal exchange:

I think that’s part of what we’re going to go through and what we’re going through now, is trying to figure out what exactly is the best path. Because…we don’t know what’s going to happen with the D.C. circuit, or for that matter, any of the other cases.

Sanders went on to explain his plans to seek more waivers in an attempt to “waive” big portions of Obamacare that he doesn’t like, such as the individual mandate. Sanders is welcome to make any plans he likes, but — assuming Sanders’s desired waivers would actually “block the employer mandate” — the federal government would have to approve them. I can’t understand why, if he’s truly interested in blocking these mandates, Sanders wouldn’t support staying on the federal exchange, at least until Halbig has played out in the court: under Halbig’s logic, the consent of the federal government to eliminate the individual mandate wouldn’t be required.
I told Sanders I had specifically talked with other legislators who were going to be working to amend the law and asked if he would join their efforts, but he again declined to take a position and (again) questioned my reading ability. I’ll let you decide if he answered the question:

I think you’re misreading the statute. I think [the exchange board] have to make the determination, so you have to go through a process of switching from that…[July 1, 2015] is not the day. I think the determination…what the board is deciding is whether to do it and how to do it. And that includes timing. So I think what you will see is us weigh a lot of options and consider a lot of different things. That very well may, it could be an option. But I think right now figuring out what is the best path and approach forward.

Rep. Joe Farrer, in contrast, told me he’ll be working diligently between now and the legislative session to rally support for keeping the state on the federal exchange:

The decision to give the exchange board so much authority was a mistake the legislature made in 2013. Thankfully, we’ll have a chance to correct it in the upcoming 2015 session. I hope my colleagues will join with me to fight a state-based exchange and protect Arkansas taxpayers and businesses.

Arkansas law, if unaltered, is a time bomb that will almost certainly lead to the creation of a state exchange sometime in the next year. But a lot has changed since that law was passed — like a court ruling that said Obamacare subsidies are illegal in 36 states — and it’s not too late to amend or repeal it. With a legislative session in January, and a decent chance we’ll have a Republican governor at the helm of a Republican-dominated legislature, it really is a “no brainer.”
Pro-Obamacare expansion Republican lawmakers have long opined about their desire to “protect” Arkansas businesses from Obamacare mandates. Now they (potentially) have an opportunity to actually do it. Will they take it?

One thought on “Arkansas Has A New Chance To Fight Obamacare. Will We Take It?”