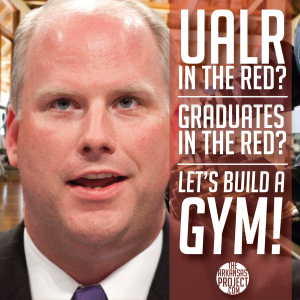 Attorney General Dustin McDaniel isn’t the first name that comes to mind when one thinks of physical fitness, but maybe that will change soon for Bowen Law School students — especially when they enter Bowen’s new gym: it’s partially paid for with a $100,000 “donation” of state funds which had previously been entrusted to the attorney general’s office.
The new gym, which is scheduled to open soon, will be paid for from state settlement funds from a Lender Processing and National Credit Adjusters lawsuit. Although law students can already use the gym at UALR’s undergraduate campus, this additional workout facility will be conveniently located on the sixth floor of the law school building itself.
Bowen Law School administrators also want to make sure you know that this “donation” is from Dustin McDaniel. They plan to do this by putting up a plaque thanking McDaniel for “making this facility possible;” the plaque will also “particularly thank the Honorable Dustin McDaniel, the 55th Attorney General of Arkansas,” according to one law school administrator’s e-mail in May. That’s a pretty good political return on investment for the act of writing a check with public funds.
There’s a larger political problem here: it looks like a case of one set of public officials complimenting another just for spending state funds on projects where the benefit to the people of Arkansas is highly uncertain.
It’s no secret that law schools across the country have been suffering in recent years from low enrollment numbers. Times have been particularly tough for Bowen, which has suffered a 36 percent drop in applications from last year — according to Bowen’s own documents.
Is a new gym with only a few ellipticals and treadmills really a good use of funding – especially at a time when law students are graduating with extraordinary debt burdens, and with little certainty of finding a job that actually requires a law degree?   And why isn’t a law school that has already reported that it is in the red trying to balance its budget before it starts building vanity projects?
Does the Attorney General and the Bowen bureaucracy really believe that ensuring that a bunch of twenty-something students and their well-paid professors have an in-house gymnasium is the highest and best use of government largesse?
Maybe the money could have been used to fund scholarships for poor students to attend law school.  The Dean of the law school seemed interested in this in the past.
We asked the Fayetteville law school what it is doing with the $100,000 it got from the attorney general. The Fayetteville administration was apparently stricken with an attack of good sense and fiscal responsibility: it put its $100,000 towards a “general scholarship fund to attract and retain law students from the state of Arkansas.”
It doesn’t take a legal expert to know that prospective law students are likely going to be more interested in the financial-aid package the law school offers – and less interested in whether there is a $5000 elliptical or treadmill in the building.
Let’s hope the folks running the Bowen Law School take a more conservative approach to spending other people’s money in the future. I’ll have more to say about the deliberations behind the gym in a few days.

One thought on “Bowen Law School’s Response to Law Student Debt: Look, We Have A Wonderful Gym!”