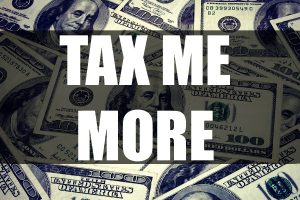 After 200 years of ranking at the bottom of the 50 states for poverty, we have finally identified what ails us in Arkansas: our taxes are too low!

If you don’t believe me, take our Lieutenant Governor’s word for it: in a statement released by his office yesterday, Lt. Gov. Mark Darr said

“Today I am announcing my support of Ballot Issue #1 concerning Arkansas Highways. No one hates taxes more than me; however, one of the primary functions of government is to build roads and infrastructure and this act does just that. My two primary reasons for supporting Ballot Issue #1 are the 40,000 non-government jobs that will be created and or protected and the relief of heavy traffic congestion.”

He went on to say, “I believe doing nothing is more costly to the state of Arkansas and its citizens than implementing this act.”  Interesting ‘rithmetic.

I’m not sure who wrote this press release, but this should probably be their last one. There are several substantive problems with this statement.

First of all, to say “no one hates taxes more than me” while endorsing a tax increase is, um, less than persuasive.

Second, the primary function of government is to protect the rights of citizens.  (This view probably puts me in the minority of American citizens, but so be it.)

Third, I thought we, as conservatives, had all pretty much agreed that the whole Keynesian / Obamanomics / “taxes create jobs” thing was basically nonsensical.  Now we have the Lieutenant Governor, who has led the charge on several conservative issues, telling us that a new half-cent sales tax on all sales in the state will create jobs?  Oh, I’m sorry “create or protect” (where have we heard that before?) And not just some jobs, 40,000 jobs!  With all due respect, that is government math — and it don’t work.

I called the state director for Americans For Prosperity, Teresa Oelke, for her comment on Mr. Darr’s endorsement of the tax hike. Oelke’s group has been flooding the mail with ads against legislative candidates that voted to put the tax hike onto the ballot.  Oelke’s full response to Darr’s endorsement:

Lt. Gov. Darr is a nice guy. I’ve gotten to know him fairly well personally since he began his candidacy for office a few years ago. As I mentioned, he’s been a champion for transparent government and had led the charge against Obamacare (as much as he could in his position). On these issues, he’s been a voice for the voiceless in a lot of ways. But these pro-liberty actions do not excuse his most recent conduct. He seems to be making a dangerous transition from a “small business owner in government” to a politician. It’s a slippery slope.

Much like the federal government, Arkansas has a spending problem, not a revenue problem — we already have the 6th highest combined sales tax rates in the nation. And we’ve tried this method of governance (raising taxes every time we decide we need some more dough) for nearly 150 years — I thought we were ready for a new approach? I say: let’s give economic freedom a chance.