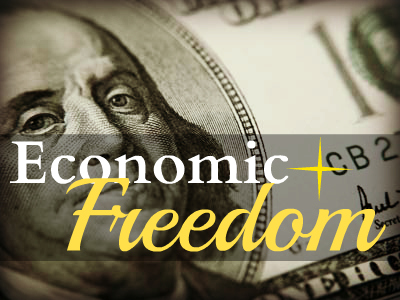 I was privileged to spend the last week at a liberty-minded think tank studying economic freedom.  Part of the program included a reception at the American Enterprise Institute (AEI) and a brief speech from AEI President Arthur Brooks.  A central theme of Brooks’s talk was that defenders of economic freedom often lose the messaging battle.  For instance, while liberals implore their audience to help the starving and the homeless, conservatives sometimes end up blabbering about the tyranny of minimum wage laws that impede the homeless from entering the workforce and the immorality of the welfare state that perpetuates our social problems. These are important things to discuss, no doubt, but our concerns about the poor might be perceived more credibly when presented in a more sympathetic tone.

Mr. Brooks said one thing that evening that I found particularly striking:

A corollary is that caring about the poor necessarily implies providing long-term opportunities for them–a “hand up,” not a handout.

And you know, Arthur Brooks is right.  Capitalism is the only economic system in the history of the world that has ever brought anyone out of poverty.  It’s the only system where opportunity is provided and rewarded, allowing people to move up economically.

Despite capitalism’s historic successes, economic freedom and free markets are under attack.  If you are even a casual political observer, this should come as no surprise to you.  We see policies coming out of Washington, DC every day that threaten our freedom to work, produce, build, and flourish.  But it might surprise you to learn that economic freedom is under attack in Arkansas as well.

According to a study released by the Mercatus Center last June, our state ranks 32nd in economic freedom–the bottom half of our nation’s 50 states.  And in an effort to heed Mr. Brooks’ advice and be more clear in my messaging, allow me to explain what this means.

Less economic freedom in Arkansas will mean more dependence on state government.  It means more barriers into the marketplace (more regulation, higher taxes, and more protectionist laws that prevent entry into markets restricted to friends of politicians).  It will also mean that, should you overcome these high barriers to entry, you will spend a great deal of money complying with all of the regulations on your industry.  In fact, businesses in America spend $1.75 trillion annually on compliance with federal regulations–and that’s not including state regulations.  In 2008, the Laffer Center estimates that individuals and businesses spent 6.1 billion hours simply complying with the tax code.   Economic freedom means eliminating unnecessary burdens and allowing people the opportunity to provide for themselves.

I heard Mr. Brooks speak again on Friday at another event in DC.  He said, “You’re here because you care about people.  It’s time for us to start talking about people because people matter.”

So instead of talking about quantitative easing, we should be talking about homelessness and how the free market provides the best opportunity to lift people up.  After all, there is nothing compassionate about a temporary government handout that leaves people dependent and ultimately worse off than they began.  A job is the best ‘social program’ we could ever provide for someone in need and it is our job as defenders of economic freedom in this state to take that message to the people.

In Arkansas, economic freedom is under assault.  Unless we slow the growth of government in our state, we will squander opportunities for our children and grandchildren.  Instead of leaving them with a free economy where they can thrive and provide for themselves, we will leave them in a system of perpetual poverty and government dependence.

The fight for economic freedom will never stop.  Government will continue seeking expansion as long as it exists.  It’s up to us to ensure government is limited and freedom flourishes in The Natural State.  It’s a moral imperative.

7 thoughts on “Economic Freedom: A Moral Imperative For Arkansas”