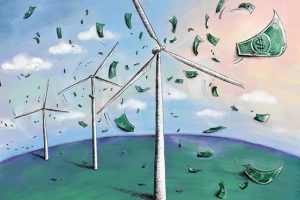 While many government policies are developed with good intentions, few achieve their intended results. The Production Tax Credit (PTC) is no exception. The PTC — a subsidy for wind energy companies — distorts electricity prices, undermining the competitive marketplace and costing the taxpayers a bundle. In short, it makes us all poorer without delivering its promised results.

You may recall that, last year, Arkansas Governor Mike Beebe said that anyone who opposed subsidies for the wind energy industry was “un-American.” Since that time, two wind industry companies in Arkansas — that have received millions of taxpayer dollars — have gone belly up: LM Wind Power and Nordex. Beebe’s response? Blame Congress. But is Congress really to blame or is a lack of demand creating a tailspin in the wind industry?

Established by the Energy Policy Act of 1992, the PTC provides energy producers with a 2.3 cent subsidy for each kilowatt hour of energy produced by wind. 2.3 cents might not seem like a lot, but the Joint Committee on Taxation estimates that the recent extension of the PTC for one year will cost U.S taxpayers a whopping $12 billion.

The PTC distorts the energy market

Energy experts have long recognized that wind mostly blows during the night — because that’s not peak energy consumption time, wind energy has rarely been able to meet much of our energy demands. However, the PTC encourages companies to invest time and resources into wind turbines which re-directs resources and research from more energy-productive activities to less energy productive activities. In reality, the PTC subsidy makes less efficient technology (wind energy) more profitable, but artificially so.

And the PTC doesn’t just redirect research and resources away from more productive energy sources — it drives up the cost of energy: wind energy isn’t any cheaper for consumers. In fact, the wind PTC cost $35 per megawatt hour on a pre-tax basis. This is more than $6 more than the average wholesale price of power, which is now approximately $28 per megawatt hour.

When you combine this with the impact of state mandates that artificially encourage wind power, what it means is that Arkansans are paying for part of this policy by means of the tax code. In other words, Arkansas is subsidizing California’s renewable energy mandate that requires a third of all electricity to come from renewable energy sources.

According to the Congressional Research Service, allowing the PTC subsidy to expire would incentivize the wind industry to make wind power more competitive and efficient:

Allowing the PTC to expire may motivate wind equipment manufacturers and developers to take certain actions (e.g., maximize turbine performance, minimize manufacturing costs) necessary to make wind electricity more broadly competitive on an unsubsidized basis. These actions could potentially result in a stronger and more robust, although possibly smaller, wind industry that can compete directly with all sources of power generation.”

While the industry might shrink, the wind industry would finally be able to compete directly with all other sources of power generation without distorting the market and costing taxpayers billions.

The PTC is structured so that each new wind plant is guaranteed to receive the subsidy for 10 years. This encourages corporations to open plants with little regard for demand for energy or the long-term sustainability beyond the 10-year subsidy period. These gigantic subsidies prop up some unprofitable plants, while other profitable plants face competition from subsidized ones. The result is, frankly, a mess. Instead of pursuing affordable, cost-efficient energy sources, companies pursue wind energy because of the artificial incentive (PTC).

(On an Arkansas note: Nordex opened its doors in 2010. That means they were eligible for the PTC for 10 years, or until 2020. Yet, when they closed their doors earlier this year, Governor Beebe blamed it on the lack of a tax credit. He learned the wrong lesson from the Nordex debacle: the right lesson is that if we actually allowed energy markets to operate, we’d be able to tell which businesses are genuinely profitable.)

Of course, the cinderblock on the scale that the PTC creates — the large cost to taxpayers, the enormous (and expensive) market distortions, and the discouragement of research on more efficient energy sources — could have some merit if wind energy was actually leading to a cleaner environment — but it’s not. When Congress asked the National Academy of Sciences to conduct an internal review of the tax code and specify which provisions have the largest effect on reducing carbon and other greenhouse gas emissions, they found that the PTC subsidy has very little, if any, effect on greenhouse gas emissions, and according to the study (Effects of U.S. Tax Policy on Greenhouse Gas Emissions), the tax system is an ineffective mechanism for combating “climate change.”

Considering that companies will have a greater incentive to innovate cleaner and more effective energy sources without this subsidy and tax payers will have $12 billion more dollars to use on energy expenditure, our country stands to gain from letting the PTC subsidy expire. The existence of the subsidy is discouraging cleaner, more productive, more innovative forms of energy.