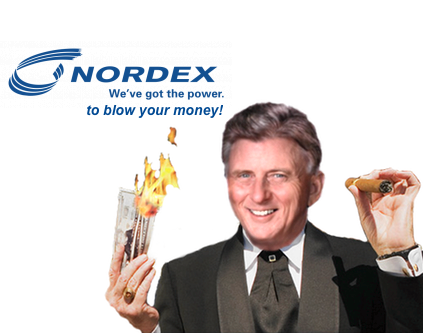 Less than five years ago, the possibilities seemed endless. Nordex USA had just announced its intention to move to Arkansas and create hundreds of new jobs. The age of renewable energy was finally here — and it was going to lift Arkansans out of poverty and into prosperity. Arkansas would finally be the “land of opportunity.” Heck, we might even change the state motto back! You see, Nordex wasn’t just promising jobs — they (and Governor Beebe) were promising careers. In fact, that’s what their Vice President Joe Brenner said: “These are not just jobs, they are careers.” And not just a few careers: 750 of them for the people of Jonesboro and the surrounding communities.

Even better, it wouldn’t cost taxpayers a dime because the project would more than pay for itself in just a few years, according to CEO Ralf Sigrist in 2009:

The investment will pay for itself within 12 years and will save considerable amounts over the long run. Just as renewable energy will do for all of America. The investment pays off.

In case you didn’t hear, news broke on Friday (like all bad government news does) that Nordex is all but closing up shop, laying off 40 of its remaining 50 employees. For those keeping score at home, that’s less than 4 years since the company “launched” and about 8 years short of achieving the wind-powered Utopia that Sigrist promised. According to at least one report, the most Arkansans Nordex ever employed was “about 100.”

To be fair, that was 2009. How could Sigrist or Beebe have known that their taxpayer-funded experiment wouldn’t work? How could they have anticipated that there’s almost zero real, market-driven demand for wind energy and that the economy would not recover? It’s not like they have a crystal ball or anything. I guess they could have read a book on economic history or watched the news. Or done an Internet search. Or, heck, just asked me! Of course, that might seem like a lot of work. But remember those chronic negativists who were concerned that Beebe was putting millions of taxpayer dollars on the line at a time when the economy had just collapsed? In retrospect, maybe they had a point.

Perhaps no one was more shocked at the Nordex news than Governor Beebe, who boldly reacted by issuing a scathing statement that blamed Congress for Nordex’s failure. More on that in a second. But you know who wasn’t shocked? The Arkansas Economic Development Commission. In fact, AEDC spokesman Joe Holmes said that the news “did not catch us by surprise.” I guess the public didn’t need to be informed until the company decided to start packing its bags. Here’s what Gov. Beebe had to say on Friday:

Nordex’s departure is directly related to Congress’s inability to follow through on an alternative-energy policy they started and now can’t agree on. I have been saying for years that there must be stable tax policy with this kind of intense capital investment. Congress has totally failed to provide one, wavering year-to-year on the wind energy tax credit. This indecisiveness is costing Arkansas, and America, jobs.

But, Governor Beebe: if you knew the ‘instability’ was there, why did you invest millions of taxpayer dollars into Nordex? And when the Nordex experiment was announced, you didn’t say anything about depending on Congress for its success. In fact, you said Arkansas had all the tools it needed to make it work:

The clean-energy sector has great potential for creating high-quality jobs in Arkansas and across the United States. Nordex has recognized that Arkansas has the right location and workforce to produce American-made components for the North American wind industry.

It’s not the first time a lofty promise from a wind-power company to Arkansas taxpayers has been broken: last year, LM Wind Power in Little Rock executed mass layoffs after breaking its promises to employ “1000-1100.” It’s hard to say exactly how much money they got from taxpayers — believe it or not, some of that information is “confidential!” But we know they got at least $15 million in upfront cash, courtesy of Governor Beebe. That figure does not include all of the tax breaks, refunds, and credits they received.

Democrat Party of Arkansas spokeswoman Candace Martin was quick to defend the Beebe administration in light of this most recent business failure, telling me on Twitter

If you read Beebe’s statement on this, you would see that #Nordex is repaying the incentives.

I guess her argument is, “Hey, it didn’t pan out, but at least taxpayers are only getting a little screwed.” To put it another way: “Nordex is now being asked to pay us back an uncollateralized, interest-free loan for which it re-negotiates the terms of repayment! What could go wrong?” Taxpayers have already spent $2.5 million in cash on the company that is now leaving; we’ll probably never know the total amount of what they got away with. We’ll also never know the full negative economic impact of those millions of dollars being pulled out of the economy and given to Nordex at a time when the entire American economy was on life support. Furthermore, as I told Martin, the AEDC doesn’t seem to share her optimism that they’ll get all of the money back. Holmes told one reporter:

We’ll be working with the company over the coming weeks to work something out with that. There are formulas based on employment levels and wage levels, on how long they were able to keep folks employed.

Sounds like a very fluid situation to me — and if the company is struggling so much that they can’t employ 40 people, color me shocked if they can afford to repay taxpayers the $2.5 million they’ve spent out of the $8 million in upfront cash they received. Who knows where the remaining $5.5 million is — but Candace Martin isn’t worried about it and thinks we should all just trust Governor Beebe to get it back for us. In contrast, though, those who are not on the payroll of the state Democratic Party may suspect that her optimism is unjustified.

This is not simply an embarrassment for our state or a burden on taxpayers: it’s a scandal. It’s a scandal because it’s our hard-earned money that Beebe and his cronies are gambling with. We might be more forgiving (or at least understanding) if he were winning. But he’s not. He’s losing over and over again, all the while demanding more taxing, more spending, and characterizing us as “un-American” for opposing his schemes. Instead of taking responsibility for the bad bets he made, he’s diverting blame and attention to Congress. Governor Beebe, this cannot be justified. You made the decision to give LM Wind Power millions of our dollars. You made the decision to give Nordex millions of our dollars. Their broken promises are your broken promises because you stood with them and put the seal of Arkansas’s approval on them. And now, in a triumph of hope over experience, we are all supposed to keep our fingers crossed that your latest experiment, Big River Steel, is more successful. I suppose we can all agree on one thing: the stakes are much higher.