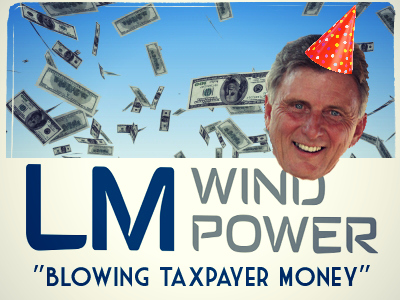 The Arkansas Democrat-Gazette recently reported that LM Wind Power is laying off 234 workers.  In today’s Obama economy, perhaps this isn’t startling news.  Perhaps it wouldn’t even be news at all, except for the fact that LM Windpower is a pet project of the Beebe Administration–and, consequently, a pet project of the taxpayers.  And perhaps this explains why Governor Beebe is so passionate about defending LM Wind Power’s goodies.

In June, Governor Mike Beebe spoke at a wind power conference in Atlanta.  He advocated the renewal of federal wind power subsidies, saying “Anyone standing in the way of this industry, frankly, they’re un-American.”  In light of the taxpayer abuse that LM Wind Power has perpetrated, perhaps it is time to reassess whether it’s possible to be patriotic even while opposing taxpayer subsidies to one of Beebe’s favored industries.

The “world’s leading supplier of rotor blades for wind turbines” opened shop in Little Rock after receiving a whole bag of goodies from the taxpayers in 2008.  According to the ADG,

“The company received $6.9 million from the Governor’s Quick Action Closing Fund, and $8.04 million from the Economic Infrastructure Fund, for infrastructure costs. LM Windpower also received a corporate income tax exemption for 25 years, sales-tax refunds on building materials, taxable machinery and other equipment associated with the expansion project, and a 5 percent rebate on new payroll for 10 years, starting in July 2007.”

That’s $14.94 million in upfront cash — not including a smorgasbord of tax breaks, refunds, and rebates.  So while Democrats and liberal bloggers in Arkansas are busy bemoaning “corporate greed” and “tax cuts for the wealthy,” their champion, Governor Beebe, is handing out taxpayer money to his favorite corporations.  Where’s the outrage?

A spokesman for the company, Adam Ruple, blames the company’s poor performance on the “decrease in demand, attributed to the nonrenewal thus far of the federal production tax credit.”  In other words, government hasn’t been able to artificially create enough demand for alternative energy–so they should keep trying because we really need the money.  According to another statement from the company, however, demand for “wind power installation” is expected to decrease by 70% from 2012-2013–and that’s assuming the federal tax credit is extended.

A spokesman for the Arkansas Economic Development Commission (apparently my preferred nomenclature for the Commission, the “Arkansas Corporate Welfare Bureau,” was already taken) told the ADG that the company’s poor performance will not affect the amount of goodies they receive from taxpayers.  “They’ve got until 2014 to create jobs,” Joe Holmes said. So here we have a taxpayer-funded spokesman who is paid not to notice that the company is headed in exactly the wrong direction.

The company “promised” to create 1,000-1,100 jobs when they opened in 2007, according to the ADG, and the AEDC said in a news release in 2007 that the company “will employ more than 1,000 people in the next five years.”   Before the layoffs, they only employed 300 full-time workers and 140 temporary workers.  They are laying off all of those 140 temporary workers, plus 94 of the 300 permanent employees, leaving them with approximately 206 workers.*

Even without counting the many additional benefits LM Windpower received that cannot be immediately quantified, this means that Arkansas taxpayers have spent over $72,500 for every job that LM Windpower “created.”  We all would have been much better off if each one of those 206 employees could have received a one-time windfall check of $70,000, with the balance kept by the taxpayers.

As LM Wind Power broke ground in 2007, Governor Beebe said, “When a strong partnership like this one can form across an ocean and bring 1,000 high-quality jobs to Central Arkansas, it gives us a glimpse of our potential for the future.”  Apparently our future is millions of wasted taxpayer dollars and 206 jobs.

This is simply the latest example of the failures of cronyism.  We see it at the federal level all the time:  Obama doling out hundreds of millions of taxpayer dollars to the solar energy company Solyndra, which subsequently went belly-up, is one recent example.  These things happen all the time at the state level as well, but they don’t always get the scrutiny they deserve.  Quite simply, this is the government picking winners and losers.  They’re gambling, trying to interfere in the market and create demand for products that they like–and their friends are invested in–and they’re using your money to do it.  If Americans wanted wind power, they would demand it and the market would supply it.  But the majority of Americans do not want it, as evidenced by plummeting demand, and they’re being forced to pay for it anyway. This is a strategy of governance that is reckless and immoral.

On October 28, 2008, as LM Wind Power opened its doors for business, Beebe said, “Today we celebrate the result of this successful partnership.”  Governor, who’s celebrating now?

*An earlier version of this story failed to delineate between the temporary and permanent jobs cut.  I’m good, but I’m not perfect.