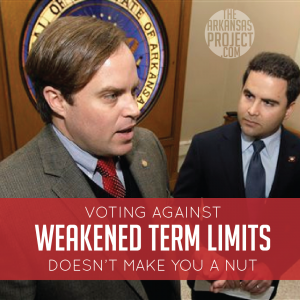 Whoa! That really would be an outrage if only a “couple of nuts” were able to sneak a resolution into the Republican Party platform that was “out of touch with Arkansans.”
However, Woods’s recollection has little basis. According to multiple convention attendees, the vote in favor of opposing Issue 3 was approximately 350-2.
Someone more sarcastic than me might make a joke here about Woods being correct about a “couple of nuts that got together on a Saturday that were out of touch with Arkansans.” They’re the two people who voted at the convention who actually support Woods’s position.
Bob Porto, co-chair of Arkansas Term Limits, said for Woods to call the Republican support for a resolution opposing Issue 3 at the convention just a “couple of nuts” is an insult to the Republican delegates.
Porto told The Arkansas Project:

I was there as an observer. There were 300-400 people still in the room. They had discussion on it. The vote was a roaring yes. There was like a spattering of 2 to 3 no’s when they asked for the nays. (Woods is) calling the state convention just a couple of people getting together, so that’s the problem i have with Woods’s calling them a bunch of nuts. There were 300 people who left their families for the weekend to represent Republicans in their counties, and he’s going to call them a bunch of nuts.

It is remarkable, though, that pro-Issue 3 legislators would complain about allegedly secretive tactics to get an anti-Issue 3 resolution passed at the Republican convention — because secretive tactics are exactly what pro-Issue 3 legislators are using to push the issue over the top in November.
Pro-Issue 3 legislators are running a “shhhh!” campaign on Issue 3, because Arkansas voters historically have overwhelmingly supported our current term limits law, according to Porto: current law caps legislators at 6 years in the state House and 10 years in the state Senate.
Therefore, the more voters hear about how Issue 3 weakens term limits, the less likely it will pass in November.
According to the Arkansas Term Limits website, 60 percent of Arkansas voters in 1992 passed an amendment to the state Constitution, which placed term limits of 6 years (3 terms) on the State House and 8 years (2 terms) on the State Senate. The term limits amendment received an even higher percentage of the vote in Arkansas than Bill Clinton did in the 1992 election.
Since the amendment’s passage, aspiring career legislators in Little Rock have not stopped trying to weaken or abolish it. In 2004, they referred a measure to the ballot that would have lengthened term limits to 12 years in each chamber. The voters rejected it in resounding fashion, with a 70 percent “no” vote.
According to the Arkansas Democrat-Gazette, Issue 3 would increase the length of time that lawmakers would be allowed to serve to a maximum of 16 years — in the state House, the state Senate, or a combination of terms in both.
However, voters won’t know this just by reading the ballot title when they go to the polls in November, because part of the title reads as “establishing term limits for members of the General Assembly.”
Nick Tomboulides, executive director of U.S. Term Limits, told the Arkansas Democrat-Gazette that Issue 3 “probably is the most deceptive ballot title we have seen.”
Tomboulides said:

We thought it could be passed by mistake if there wasn’t a major effort to educate voters.

Part of that education is through a couple of television ads that will be running in the waning days of the 2014 election.
Arkansans who vote against Issue 3 and weakening term limits in November will be well within the mainstream of voters in previous elections. They aren’t “nuts,” regardless what Sen. Woods says.