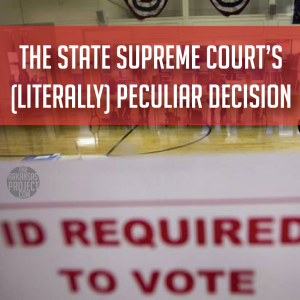 Late yesterday afternoon, our state’s Supreme Court struck down the voter ID law that the Arkansas General Assembly passed last year. It is, in many respects, a very unusual decision.
In Martin v. Kohls, a majority of Justices determined that Act 595 of 2013 would add an additional (and impermissible) requirement to vote:

Act 595’s added requirement of providing a proof of identity as a prerequisite to voting runs afoul of article 3, section 1, of the Arkansas Constitution. Section 1 of article 3 plainly states that any person may vote in an election who is (1) a U.S. citizen, (2) an Arkansas resident, (3) eighteen years of age, and (4) lawfully registered to vote in the election before voting in an Arkansas election. Ark. Const. art. 3, § 1. These four qualifications set forth in our state’s constitution simply do not include any proof-of-identity requirement.

In plain language, the Supreme Court’s argument is that any Arkansan is entitled to vote if he or she meets four criteria (“qualifications”) – as long as there’s no other pertinent language in the Constitution – and the legislature can’t create any additional criteria that would bar anyone who meets these four criteria from voting.
This is (quite literally) a highly peculiar way for the Supreme Court to understand voter ID laws, because other appellate courts have come to very different conclusions. As I discussed at greater length last year in a paper on voter ID, state Supreme Courts in Georgia, Indiana, and Pennsylvania have found the “qualifications” argument unpersuasive.
For instance, Indiana’s Supreme Court found that requiring voter ID was not a new qualification – rather, the court found that requiring voter ID was merely a procedure that confirms the identity of qualified voters and protects their rights.
Indeed, since we published my paper last year, state appellate courts in Wisconsin have also found the “qualifications” argument unpersuasive. Arkansas is sharply out of step with courts in other states on this issue.
One possibility is that Arkansas judges are just sharper and more thoughtful than those on courts in other states. Regrettably, another possibility is that Martin v. Kohls was wrongly decided.
One sign that a case was wrongly decided is if it leads to absurd results. Here’s an absurd result of Martin v. Kohls. Arkansas law currently prohibits “electioneering” within 100 feet of the polls. “Electioneering” includes such behavior as wearing campaign buttons, shirts, or caps. Suppose I show up at the polls wearing a “vote for Asa Hutchinson” t-shirt. Ordinarily, the response from the poll administrators would be to tell me to get lost (or, at least, to tell me to change my shirt). If I insist on staying there and voting, at some point I’d be committing a Class A misdemeanor.
At least until last night, when (apparently) the laws changed. As of last night, it looks to me as if the state Supreme Court has (I assume accidentally) struck down part or all of our anti-electioneering laws. Remember: according to Martin v. Kohls, anybody who’s 18, lawfully registered, a United States citizen, and an Arkansas resident is entitled to vote, period, as long as there’s nothing else pertinent in the Constitution. I honestly wonder what would happen if somebody reads Martin v. Kohls, realizes that a rule that requires the wearing of non-partisan clothing to vote is an additional (and prohibited) qualification, and wears an Asa Hutchinson t-shirt to the polling place. Can our t-shirt wearer get cited or arrested for electioneering? Can our t-shirt wearer sue the state of Arkansas for violating his or her civil rights?
What this resultant legal confusion suggests to me is that Martin v. Kohls simply wasn’t a very thoughtful opinion. In fact, there’s very little constitutional argument in the opinion. For instance, the opinion makes the point that its reasoning is based on the state Constitution, and that opinions from other state’s courts with different Constitutions are therefore irrelevant. But because other state constitutions contain very similar lists of voter qualifications, it’s a terribly weak argument just to assert that Arkansas is different – as the Court does – without explaining the how the relevant difference works. Such reasoning is uncomfortably reminiscent of the apocryphal story about the prosecutor, accused in court by the judge of violating the defendant’s rights under Miranda v. Arizona, who replies “But, in this case, your honor, the defendant isn’t named Miranda!”
Advocates of ballot integrity in Arkansas have already floated trial balloons about amending the state Constitution to address what appears to be a judicial wrong turn. Amending the state Constitution has already been found to be necessary in other states to protect the integrity of the ballot. When our own attorney general grumbles publicly about how the Supreme Court of Arkansas is getting the reputation of being a results-oriented body, amending the Constitution to protect the integrity of the ballot is starting to look like the best response.
P.S.: In one of the odder responses today to the Voter ID decision by the Arkansas Supreme Court, House Minority Leader Eddie Armstrong posted two videos to Facebook in which he references Trayvon Martin and Michael Brown.
I’m not quite sure what the point is of bringing up Martin and Brown in the Arkansas Supreme Court decision.
P.P.S.: For some of the insight in this post I’m obliged to give credit to alert Arkansas Project reader, M.L.

One thought on “The State Supreme Court’s (Literally) Peculiar Decision”