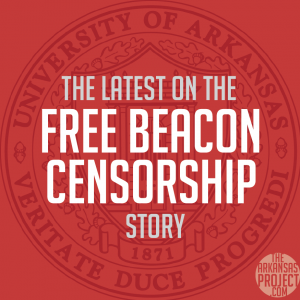 The Washington Free Beacon published another story today about conversations between Clinton Foundation officials and University of Arkansas officials that occurred the day that the UA began taking action against the Free Beacon.
The Free Beacon for months has been publishing stories that have irked Hillary Clinton supporters and flacks.
From the Free Beacon today:

University of Arkansas library administrators were in contact with Clinton Foundation officials the same day the university rushed to take action against the Washington Free Beacon for publishing recordings of Hillary Clinton discussing her 1975 defense of a child rapist, according to internal emails obtained by the Washington Free Beacon.
Timothy Nutt, the head of the University of Arkansas Special Collections library that housed the audio recordings of Hillary Clinton, spoke with the Clinton Presidential Center’s mandatory review archivist Rob Seibert on June 16 about the “Hillary Tapes” story, according to the emails.
Seibert did not respond to request for comment.
“The conversation was on a personal topic, and toward the end of the conversation, they visited briefly about the publicity surrounding the Free Beacon‘s story on June 16,” university spokesperson Laura Jacobs told the Free Beacon.

That’s an interesting quote from Jacobs, because her story is a little different than the one Nutt told me when I inquired via e-mail a couple weeks ago about conversations between Clinton Presidential Center staff (Seibert) and Nutt on June 16, a day after the Free Beacon story about Hillary Clinton joking about defending a child rapist was published.
Nutt told me via e-mail:

In regard to your question about my conversation with the Clinton Presidential Center on June 16, I received and subsequently returned a phone call from Rob Seibert, an archivist with the Center. Rob and I were former colleagues and have known each other for many years. At the time I sent the email to Chancellor Gearhart I had not spoken with Rob. When we were able to connect by telephone, Rob asked me general questions about the Roy Reed collection (when it was organized, when it was opened, how long we have had it, etc.).

As you can see, in Nutt’s response to me there was no mention of Seibert and him talking about “the publicity surrounding the Free Beacon’s story on June 16”; I had specifically asked Nutt in my e-mail if Seibert’s call was in regards to the Free Beacon.
I was interested in why a Clinton employee was chatting with a UA Library employee right before the UA revoked the Free Beacon’s research privileges to the UA archives.
I understand that the folks at the UA Library are a little gun shy right now about revealing potentially politically-embarrassing details such as this, but I would’ve appreciated Nutt being more forthright with me in his response.
Regardless, today’s Free Beacon story is just the latest discrediting of the UA Library administration’s claims of being “completely neutral regarding the intended use of library materials by researchers.”