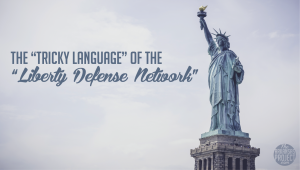 While poking around Facebook the other day, I came across the page of some organization called the “Liberty Defense Network.” As someone who loves liberty and who believes its defense is crucial, I was intrigued. But as I looked at the page, I did not see anything that discusses liberty or its defense. All I saw was an organization looking to defeat Issue 1, the tort reform amendment on this year’s ballot. The Liberty Defense Network (LDN) picked an appealing name, but I hope that anyone who believes liberty is important will see through the slick rhetoric used by this organization in its fight against tort reform.

On the LDN’s page, they have a variety of slick ads that attack Issue 1. I’ll go into some of their flawed reasoning shortly, but one ad really caught my eye. It said, “Issue 1 uses tricky language to try and confuse Arkansas voters into changing the constitution.” Really? You can go here and see the text for yourself. Advocates for Issue 1 are pretty clear about what it would do to change the state’s legal system. I fail to see how that is tricky.

In contrast, I do see a lot of tricky language being used on the LDN page to try to confuse Arkansas voters. For instance, the organization does not spell out what Issue 1 would do. Instead, it makes a variety of claims about the impact of Issue 1 that are, to be generous, highly questionable. Consider these two claims by LDN:

“Issue 1 is an effort to destroy the right to trial by jury in Arkansas.” Since this amendment does not affect trial by jury for criminal offenses at all, this statement is dishonest, not just tricky. Then there is the fact that in civil cases, juries are only limited under Issue 1 regarding compensation for non-economic damages and punitive damages. That is hardly “destroying” the right to jury trial in Arkansas.

Of course, this “value of human life” argument is the same thing we see from others in the state trying to co-opt the pro-life cause to oppose Issue 1. They use the language of the pro-life movement to try to persuade people that tort reform equivalent to abortion. There is plenty of language on the LDN Facebook page that tries to do the same thing (e.g., “it is wrong to play God and assign a dollar value to a human life”).

The LDN also goes one step further and co-opts the military into their cause, with one ad saying, “It would limit the very freedoms veterans like me fought for by placing an arbitrary value on human life.” I have a lot of veterans in my family, and I’ve talked to a lot of people who served on the military. Oddly, none of them has ever told me that they signed up to fight for our country because they opposed contingency fee limits or caps on non-economic damages. Of course, maybe I’ve just been talking to the wrong veterans.

The LDN has such over-the-top rhetoric against Issue 1 that it is difficult to think that anyone could take them seriously. The organization does not discuss the actual legal reforms that Issue 1 would put in place; instead, it uses tricky language to scare people and tricky language to confuse voters. It looks to me like a front group that is run by a couple of trial lawyers who are used to making windy speeches in front of juries, but are well aware that such arguments would never succeed in a bench trial. Whatever the case may be, this is a flabby and deceptive attempt to steer the debate over tort reform away from the real issues at play in this amendment.

One thought on “The “Tricky Language” of the “Liberty Defense Network””