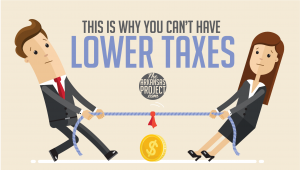 If there is one thing that conservatives can agree upon, it’s that Arkansas needs tax reform. The state has a high tax burden and Arkansans deserve relief. So why are some conservatives standing in the way of pro-growth tax reform that would make the code fairer?
Right now the state’s tax reform task force is meeting in an attempt to find a way to improve the Arkansas tax code. It recognizes that income tax rates are too high, discouraging work and investment. It also recognizes that there are inequities in the tax system, where certain industries get breaks while others do not. The task force appears to be advancing the perfectly logical idea that the state could eliminate some of these tax breaks, thus ending the practice of designating winners and losers through the tax code, and use that revenue to reduce income tax rates, thus shifting the tax code in a way that would reward work and encourage economic growth.

This is what sound tax policy should look like: low rates and few exemptions. Government must impose taxes to collect revenue to function, but it should do so in a way that minimizes its interference in the economy. Unfortunately, some so-called “conservatives” don’t realize this, such as Jan Morgan, who is running for governor. One particular task force agenda item, ending the special treatment in the sales tax code for groceries, is the special object of her ire.

Politically, I can see why. It’s pretty easy to distort the facts and charge that Governor Asa Hutchinson wants to raise taxes on the food you eat. That, of course, ignores the fact that this is not the governor’s idea; it is, instead, being discussed by a task force that he appointed. It also ignores that the revenue that will come from ending this exemption will be used to allow other tax relief. But politicians often ignore context and inconvenient facts, so I’m not surprised that this is occurring now.

This sort of political sophistry has real consequences for the people of Arkansas, however: it will make tax reform much more difficult to accomplish. Conservatives say they want tax reform, but when concrete plans are introduced to accomplish this, opportunistic politicians oppose it. They say, “We want tax reform, but not this tax reform” but then fail to offer any realistic or detailed alternative to what is being proposed.

Jan Morgan is a perfect example of this. On her website, she pays lip service to lower taxes: “We need bold, large-scale tax reform that addresses lowering tax rates, making government more efficient, and shrinking the size and scope of government with less government spending.”
That sounds nice, as far as it goes. She is right that one way to accomplish a large-scale tax reform would be to cut government spending (another is to reformulate the tax code by, say, eliminating exemptions and cutting rates). So how does she want to accomplish her reform proposal? She provides no details, but merely says “we should implement a tax-expenditure limit, putting a cap on the growth of state government spending from year to year.” Strangely, she claims this would “reduce the size and scope of government.” She’s wrong. All this would do is reduce future growth in government; it would not actually shrink the current size and scope of government. I love tax-and-spending limits, but Morgan should be realistic about what they would accomplish.

Morgan says she supports large-scale tax reform coupled with spending cuts, but offers no details about what this reform should be or what spending should be cut to accomplish it. She pays lip service to tax reform but has no plan to actually accomplish it.

It looks to me like the animating principle of Morgan’s attack on this task force’s work is not that she opposes its policy (I doubt she can even explain what it’s doing); rather, she sees it as a good way to bash Governor Asa Hutchinson. She can demagogue the issue by saying that the governor is trying to raise taxes, ignoring the larger context of the task force’s work.

There are policy arguments to make against what the task force is doing. Morgan isn’t making those arguments, though. I’d give her credit if she would offer a specific plan on how she would reform the tax code in a revenue-neutral way or cut spending in order to pay for income tax cuts. Such a plan should also be realistic, rather than one that has no chance of passage in today’s political environment. Until she’s willing to produce such a plan, her attacks on the task force’s work is merely a way to score cheap political points. It also implies that she would rather see income tax rates remain at their high level rather than be reduced. As a practical matter, Jan Morgan’s position here is anything but conservative.