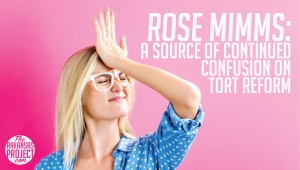 The effort to attack tort reform on “right-to-life” grounds continues. The latest example is an op-ed in Townhall by Rose Mimms, the executive director of Arkansas Right to Life. As has been the case in the past, Mimms tries to claim that supporting tort reform (Issue One in this case) violates pro-life principles. And, as has been the case in the past, Mimms relies on emotion, not facts, to support her case. She also implies that God is on her side and against the tort reform measure she discussed, which is especially troubling to me. It’s unfortunate that this is the level of debate that we are now seeing in the discussion over Issue One.

We’ve debunked the supposed pro-life case against tort reform at length on TAP in the past. I’ll discuss this matter again in my next blog post, since apparently not everyone has gotten the message. Today, however, I want to take issue with some other things that trouble me about the continued advocacy by Mimms against tort reform.

To begin, it is worth noting that even Mimms acknowledges that she doesn’t really know what she’s talking about regarding tort reform being a pro-life issue. In the Townhall op-ed, she says, that tort reform will “create a climate that could attract more abortion providers to our state.” And yet, she does not explain how that will happen. That’s because she cannot do so. Last year, Caleb Taylor talked to her for TAP after she had written a similar op-ed. In that interview, she admitted this:

By limiting awards for medical malpractice could, I don’t know if it will, but I just have this fear that it could be an incentive for an abortionist to come to Arkansas and start a surgical practice… I don’t have any evidence or any proof. It’s just a fear that I have.

Consider that last sentence – “I don’t have any evidence or any proof. It’s just a fear that I have.” Given that tort reform has been tried in numerous states around the nation, you’d think that if this fear had any basis in fact, Mimms could come up with some evidence. But she hasn’t. You may also think that after her interview with TAP, she might have reflected on the groundless nature of her opposition to tort reform. Again, this hasn’t happened, since her most recent op-ed on this issue is just as devoid of facts as her first. Some people would be embarrassed to base their political views on irrational fears, but that is the way Rose Mimms has chosen to conduct her life.

But, says Mimms, she has God on her side. I guess that makes up for not having facts on her side. As she modestly claims in her Townhall piece, “I am on a mission from God.” Now, perhaps Mimms is a fan of “The Blues Brothers,” since Jake and Elwood Blues also repeatedly said,”we’re on a mission from God” to justify their off-kilter schemes. Perhaps Mimms actually believes that God is telling her to oppose tort reform. I am a tad bit skeptical that God is doing this, since Mimms doesn’t have a firm grasp on what Issue One actually does (as will be discussed in the next blog post). If God is telling her to oppose it, you would think that at least He’d have his facts straight. Instead, it appears to me that she is trying to co-opt God to settle a political argument, and trying to attract Christians to her side without actually relying on evidence for her point of view.

As someone who is both Christian and pro-life, I find that pretty offensive.

Tort reform is a legitimate issue for public policy debate. There are reasoned views on both sides of the issue. There is no need to invoke the deity in an attempt to shut down that debate. One is not opposing God if one supports tort reform, no matter how much Mimms tries to imply otherwise. I hope she is not resorting to this tactic just because she has no evidence that tort reform does indeed lead to more abortion. I don’t know if this is the case, but I do know that there is very little coherent reasoning behind her attacks on Issue One. I will be discussing this more in detail in my next blog post.