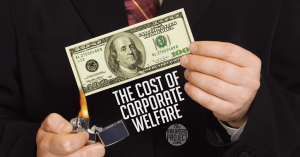 While they disagree on a lot, both Democratic and Republican elected officials seem to believe that economic development incentives are vital to the state’s economy. These incentives, which are essentially corporate welfare, may be popular with politicians but have a mixed reputation with researchers. An important new study casts doubt on the belief that Arkansas corporate welfare is doing much to deliver on the promises made by the state’s politicians.

Since 2007, Arkansas taxpayers have provided nearly $187 million to the state’s primary corporate welfare (or “economic development”) program, the Quick Action Closing Fund (QACF). An analysis by the Arkansas Center for Research in Economics (ACRE) has concluded that taxpayers aren’t getting much in return. This fact sheet sums up some of the report’s findings on how much this program is costing taxpayers..

According to Arkansas Economic Development Commission, the QACF is responsible for 21,422 jobs in the state. ACRE’s analyst, Jacob Bundrick, disagrees, writing, “we found no evidence to suggest that Arkansas officials are able to increase employment or business establishments in Arkansas’s counties by providing QACF subsidies to favored businesses.”

It is bad enough if taxpayers are funding an ineffective program. What makes it even worse is that this program is diverting money away from other government priorities. Bundrick lists some other things that the money going into the QACF could pay for. These include:

What politicians seem to forget is that when they give money to corporations, they take money from services that benefit everyone. Instead of paying for the priorities above, the QACF gave money to these companies:

In his paper, Bundrick writes, “Arkansans deserve (1) increased transparency into how public officials are spending QACF funds and (2) evidence-based policies that reduce the risk that taxpayer money is wasted.” To accomplish this goal, he gives five recommendations that legislators should consider. Tomorrow’s blog post will discuss those in more detail.