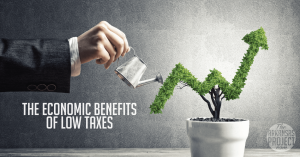 It seems likely that 2019 will be the year of tax reform in Arkansas.

The members of the Tax Reform and Relief Legislative Task Force are finishing work on their package of recommendations to reshape the state’s tax code. Governor Asa Hutchinson’s budget recommends an income tax cut. This is good news for Arkansas taxpayers. It could also be good news for the state’s economy.

In a recent Washington Examiner op-ed, Texas Public Policy Foundation Vice President Chuck DeVore explains why state-level taxes are more important than ever. The federal tax reform enacted last year limited the state and local tax deduction that individuals could claim. That has led to some consequences for residents in these high-tax states:

… for some high-income taxpayers in high-tax states such as New York and California, the savings they realize [from federal tax reform] will be smaller than would have been the case if they lived in a state with a lower tax burden, such as such as Arizona, Florida, or Texas. Some wealthy taxpayers in the highest-taxed states will even see an increase in their tax bill.

DeVore argues that this will affect state economies, as job creators migrate to lower-taxed states. He says that the data supports this contention:

As Arkansas policymakers consider what type of tax reform to implement, they should realize that they have an opportunity to shape the state’s long-term economic growth. They could implement a tax code that is similar to those of the low-tax states that are attracting the job growth described by DeVore.

There have been many good recommendations on the details of such tax reform (one from AAI’s Marjorie Greenberg). Whatever legislators and the governor ultimately decide to do, they should keep in mind the long-term benefits that the right tax structure can bring. Now more than ever, state taxes are a vital consideration for business owners. Arkansas can benefit from the mistakes being made in high-tax states if it enacts pro-growth tax reform next year.