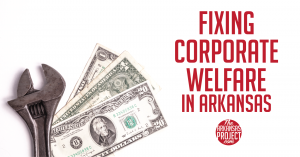 Can corporate welfare (or, if you prefer, “economic development”) be improved in Arkansas?

The answer is clearly “yes,” but what would this improvement entail? For some, it would mean ending the Quick Action Closing Fund (QACF). As discussed yesterday on TAP, the QACF is extremely expensive and an analysis indicates that it doesn’t do much – if anything – to create jobs. But let’s say that you want to keep the program intact. A report from the Arkansas Center for Research in Economics gives some good suggestions to fix some of the QACF’s glaring flaws.

What does Jacob Bundrick, the report’s author, recommend?

These are all good suggestions. If the goal of the QACF is truly to help the state’s economy, it is difficult to see why any of them would be controversial. They are aimed at both increasing the accountability of the QACF to the public (after all, the program is using tax dollars, so the people should know how the money is being spent) as well as prioritizing funding for the best uses. If you believe that the state has a role in fostering economic development, then the state should be focusing on the projects that create the most jobs at the lowest cost. These recommendations will help focus the QACF on this goal.