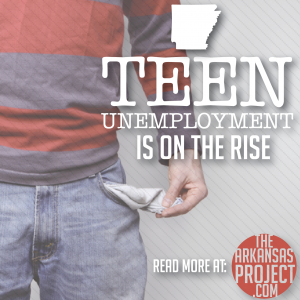 Teen unemployment is dramatically on the rise in Arkansas; a proposed minimum wage increase is likely to make it worse. According to the Employment Policies Institute (EPI), Arkansas currently has a teen (16 to 19) unemployment rate of 32 percent, which is up from 21 percent in 2011. Indeed, jobs for teenagers are beginning to become so scarce that they were referred to as “luxury goods” in a recent article. Michael Pakko, chief economist at the Arkansas Institute for Economic Advancement, said in an e-mail to The Arkansas Project:

As previously reported here, a group called Give Arkansas A Raise Now is currently attempting to get an eventual minimum wage increase up to $8.50 an hour. A plan to raise the federal minimum wage to $10.10 an hour is also under discussion. In recent months, Mark Pryor and various other Democratic politicians have signed onto the Arkansas plan — which would likely make it harder for youngsters to gain valuable, entry-level experience at a minimum-wage job. Steve Copley, head of Give Arkansas A Raise Now, recently told Talk Business he hopes Republicans will begin hopping aboard the minimum wage increase bandwagon as well. Copley told Talk Business:

We’ve said from the very beginning that anybody who would like from any party to endorse this, we’d be very welcoming, very entertaining of that.”

If Republicans actually want to help young workers who are currently looking for a job rather than just endorsing something that polls well, they won’t take Copley up on his offer. Or as the folks at EPI put it recently:

This summer, the message for legislators everywhere is that our young people need a job–not an ill-conceived “raise” for a job that becomes harder to find.