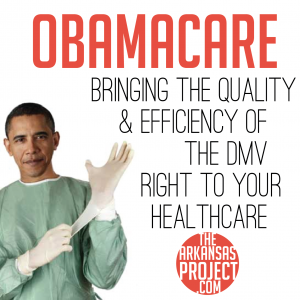 A series of politically-driven, unilateral delays in the Obamacare law (the Affordable Care Act) are now snowballing into a national disaster.
Last week, Josh Archambault and I wrote at Forbes about the myriad of eligibility problems that are plaguing state Medicaid programs, thanks in large part to Obamacare. Because of the income verification eligibility delay the Obama administration handed down last summer, states are having a hard time determining which individuals are eligible for Medicaid and which should be put into an Obamacare exchange plan. In an attempt to deal with the resulting confusion, Massachusetts is adding hundreds of thousands of individuals to Medicaid while they sort through their income data. The chaos has also hit home here in Arkansas where nearly 5,000 individuals are being thrown off of Medicaid after the state incorrectly enrolled them without verifying their income.
Now, the lack of income verification is creating an unworkable mess at the federal level, as the New York Times reported yesterday:

Of the eight million people who signed up for private health plans through insurance exchanges under the new health care law, two million reported personal information that differed from data in government records, according to federal officials and Serco, the company hired to resolve such inconsistencies.

Serco, a paper-pushing company that has been hired by the federal government to help process Obamacare applications, has been the subject of various news reports after it was discovered that they were paying their employees to do nothing.
As a result of the discrepancies in the data related to personal information of Obamacare applicants, the government has notified hundreds of thousands of people since June 1 that “the information in your application doesn’t match what we found in other records.” The feds are asking that individuals “follow up” to correct any errors. If they do not, or if it is found that individuals are ineligible for their subsidies, they may lose their coverage and/or be required to repay the subsidies they have received up to this point. According to the NYT, “A family of four with an annual income of $80,000 could be required to repay as much as $2,500.”
In addition to failing to verify income, the NYT also reports that internal memos from the Department of Health and Human Services reveal something else disturbing about the functionality of the exchanges:

Subsidies depend on household income and the number of people in a family seeking assistance. But internal memorandums from the Department of Health and Human Services say that the insurance exchanges had no way to verify family size.

Not only have millions of Americans lost their health insurance due to Obamacare, but now hundreds of thousands of individuals could have their new insurance revoked — and be forced to pay back thousands in subsidies — because of the ineptitude of the federal government and the Obama administration’s politically-driven decisions, spawned by a desire to enroll as many Americans as quickly as possible, regardless of the consequences. But take heart: no matter how bad any government program turns out to be, there’s always a group of Americans who stand ready to bail it out — the taxpayers.