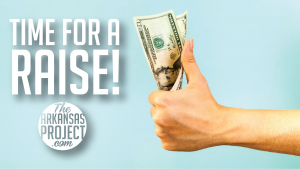 In case you’ve forgotten, the Independent Citizens Commission was created in 2015 to set salaries for elected officials in Arkansas. Elected officials, including judges, all received sizeable salary increases in 2015.

The theory behind the creation of the commission was that higher salaries would attract more qualified candidates to run for office. One of the masterminds of this plan was state Sen.

Jon Woods, who decided against running for reelection in 2016 after the pay increases were approved. He was indicted on fraud charges earlier in the year and pled not guilty.

Under Kemp’s plan, his salary would be increased from $180,000 to $199,800. Associate Justices would have their salaries increased from $166,500 to $184,815. Judges at the District, Circuit and Appeals Court levels would receive salary increases of two percent across-the-board.

Kemp said the salary increases for the Supreme Court were comparable to Tennessee, Missouri, Iowa, and Louisiana.

Since the presentation of the salary request two years ago, each of those states have raised the salaries of their Supreme Court Justices.

All in all, the total price tag for taxpayers for these proposed salary increases would be $706,900 annually. Good public service doesn’t come cheap these days. I suppose.

The commission didn’t make a decision on the proposal today; it will meet again in June.