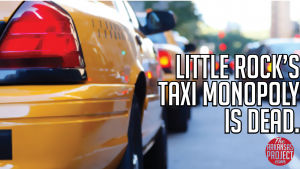 Little Rock’s Board of Directors just voted almost unanimously to give Ken Leininger, owner of Ken’s Cab, seven taxi permits. Ken’s Cab will be the first  new taxi company to be allowed to operate in Little Rock in 16 years.

If you haven’t been following the year-long story, here’s a summary: Leininger, founder of Ken’s Cab and represented by the Institute for Justice (IJ), sued the city of Little Rock last March over an ordinance that prohibited any new cab companies from competing with the city’s chosen company, Greater Little Rock Taxi Service, LLC (“Yellow Cab”). This ordinance allows new taxi permits to be issued only if “public convenience and necessity” leave no other choice, and if doing so will not harm the existing permit holder. Under the ordinance, the city created a monopoly that barred entrepreneurs like Leininger from competing with Yellow Cab. According to the state Constitution, monopolies “are contrary to the genius of a republic, and shall not be allowed.” Pulaski County Circuit Court Judge David Laser ruled in December that the ordinance violated the anti-monopolistic prohibition contained in Article 2, Section 19 of Arkansas’s Constitution.

Attorneys for the city of Little Rock have declined to appeal Laser’s ruling.

Joan Adcock was the only City Director to question Leininger about his business and to vote against the ordinance.

Adcock also tried unsuccessfully in 2014 to ban ridesharing services like Uber and Lyft from operating in the city.

The lawsuit is over. It’s ended. There was a finding the city’s requirement on the showing of necessity and convenience was not legal. We chose not to appeal because we weren’t going to be able to make a finding that you couldn’t be a taxi when you’ve got something like 150 Uber Drivers in Little Rock right now.

Today is a victory for Ken and for taxi customers in Little Rock. But it is also a victory for a basic constitutional principle—that government power cannot be used simply to protect favored businesses from competition.

Leininger says he plans to expand his operation as soon as possible:

I have been waiting two years to be granted a new taxi permit by Little Rock officials and still cannot believe that day is here. I plan to buy four more cars and hire four more drivers right away.

In other city of Little Rock news, the board tabled a motion to pass an ordinance making it harder for charity groups to feed the homeless in public parks in Arkansas. So for now, city government is allowing more than one taxi company to operate and letting people feed the poor without paying hundreds of dollars for a permit. At this rate, Little Rock might soon be known as the freedom capital of the world.