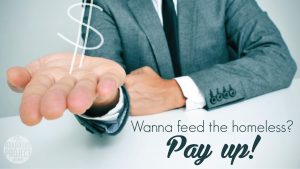 If you’re ever in a charitable mood in Little Rock in the near future, it might cost you.

It might cost you $525.00, to be exact, to feed the city’s poor in a public park — if a proposed ordinance is approved by the Little Rock Board of Directors tomorrow night.

Groups would also be required to give 30 days notice to city government officials before feeding 25 or more people in a city park.

We had complaints with businesses, particularly in the River Market area. So we wanted to get a proposal in place that says, ‘Look, you can feed, you can use parks to feed, but you can’t feed every day in the same park.’

While I sympathize with Little Rock residents who would like to enjoy a stroll through a city park without being harassed by homeless people, the city government’s solution isn’t the answer.

First, if the city is worried about businesses and residents being harassed, they should punish those doing the actual harassing — not church groups trying to serve people a meal.

Little Rock does have a crime problem. According to city data, violent crime is up 20 percent so far this year. The city’s resources might be better spent on to fight actual crime, rather than hassling a couple of aged church ladies feeding the homeless. Just a thought.

The city’s proposal is not only idiotic, but possibly illegal — under Arkansas’s Religious Freedom Restoration Act (RFRA) passed in 2015.

Bob Ballinger, the lead sponsor of the RFRA law passed in 2015, said the proposed Little Rock ordinance would burden groups who feed the poor as a way of practicing their faith.

Most of the widespread world religions have some sort of teaching of help the helpless. It would violate those persons’ ability to practice it even though it’s neutrally applied. I think the city could argue there is a compelling governmental interest to provide for safety in the parks. I think the court would say, ‘You may have a compelling governmental reason but this is not the least restrictive way possible…you need to find a less restrictive way of carrying out the purpose you’re trying to achieve.’

Let’s hope the Board of Directors doesn’t rubber-stamp this proposal into law tomorrow night — and that it finds more pressing issues to solve than people feeding the poor without a permit.