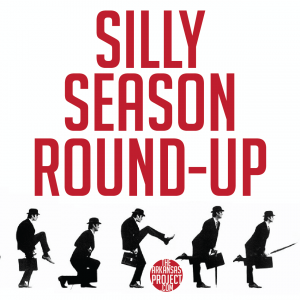 We wrote last week about a misleading ad from Pat Hays regarding his newfound love for the National Rifle Association and gun rights.
It looks as though the ad has backfired on the Hays campaign: late last week, the NRA announced that it would be airing a new radio spot throughout election day that will make voters more aware of Hays’s abysmal record on guns.
From PoliticoPro:

The National Rifle Association is responding to misleading Democratic mailers that suggest the group backs Arkansas House candidate Patrick Henry Hays with a tough new radio ad from their political that calls Hays a liar.
Casey Phillips at Red Print Strategies turned the spot last night for the gun-rights group, and they shipped it this morning to air district-wide through Tuesday.
“Patrick Henry Hays is lying,” a narrator says in the spot, previewed for POLITICO. “It’s despicable, and it’s dishonest … He’ll lie about anything … On Tuesday, we’ll stop Patrick Henry Hays and send a message to his anti-gun friends…Vote like your freedom depends on it, because it does. Vote French Hill for Congress.”
The NRA sent a cease-and-desist letter yesterday to Hays and the state Democratic Party, which is using images of NRA leader Wayne LaPierre in mailers.
Hays has an “F” rating from the NRA. But he bought a membership in the group, as can anyone, and Democrats are now pulling quotes from a generic direct-mail fundraising solicitation and using it to imply that the group —and its leader— actually supports him.
The NRA says Hays, the former mayor of North Little Rock, supports expanding background checks, restricting gun show sales and opposing concealed-carry reciprocity. He’s even been a member of Mayors Against Illegal Guns, a group supported by NRA nemesis and former New York City Mayor Michael Bloomberg.
The Hays campaign is unbowed and does not apologize for noting that he’s an NRA member, too.

Lieutenant governor candidate John Burkhalter’s last-minute strategems made him a strong contender for the Silliest Arkansas Campaign Ploy of 2014 (Burkhalter, for some reason, is spending the waning days of his campaign viciously and irrelevantly attacking his former business partner, perhaps in an attempt to divert attention from Burkhalter’s past as a male stripper), but it looks like Pat Hays’s attempt to don the mantle of the NRA will win out.
We’ll have to wait until tomorrow to see if voters punish Hays at the polls.