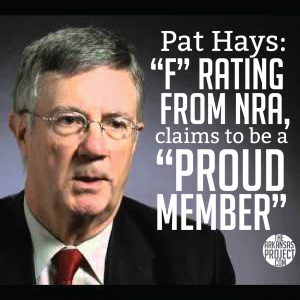 Pat Hays, the Democrat running against Republican French Hill for Arkansas’s 2nd District congressional seat, released an ad over the weekend boasting about being a “proud member of the NRA” and that he’ll “protect our 2nd Amendment rights.”
After speaking with the National Rifle Association, I’ve confirmed that he is indeed a “member-in-good-standing” with them. So, hooray for Hays, for providing one truthful nugget in this ad!
Hilariously, though, this ad has put everyone’s favorite anti-gun journalist, Max Brantley, in the awkward position of defending Hays for being a member of the NRA. Maybe later in the week we’ll find out that Hays is a proud Family Council donor  who will protect traditional marriage — then the Arkansas Times can defend him on that too!
Here’s Brantley’s explanation for why NRA “proud member” Hays’s opponent was the one endorsed by the NRA:

The NRA is spending big money on ads to defeat Hays because, primarily, he’s a Democrat. And he’s sensible on guns. Republicans call Hays’ ads deceiving. They are simply factual. He owns guns. He’s long been a member of the NRA. He supports the 2nd Amendment. Why would he want to be a member of a group that is trashing him, the Republicans whine? Maybe because he wants to change the organization from within.

Nate Steel, the Democratic candidate for Attorney General, might be shocked to hear the NRA is, “primarily,” out to get Democrats. Steel’s been endorsed by them in his race. Also, other Democratic House candidates like James Lee Witt and Jackie McPherson didn’t get NRA endorsements due to a lack of a legislative record, but still got “Aq” grades, the second-highest grade a candidate can get without having a legislative record. Hays, on the other hand, got an F from the NRA.
You’d also expect a NRA “proud member” who wants to “change the organization from within” to take the time to fill out the NRA candidate survey.
Well, you’d be wrong.
From an NRA spokesperson:

Hays refused to return the NRA Candidate questionnaire, often an indication of indifference, if not outright hostility, to gun owners’ and sportsmen’s rights. Pat Hays is trying to have it both ways. He’s promoting Michael Bloomberg’s draconian gun control schemes on the one hand. And on the other, he’s promoting his membership in the NRA. He can’t have it both ways.

According to the NRA, some of the actions Hays has taken that don’t “protect our 2nd Amendment rights” are signing a letter to the U.S. Senate urging senators to oppose concealed carry legislation that would ensure that law-abiding Americans with valid concealed handgun permits would be able to carry a concealed handgun in any other state that does not prohibit concealed carry, signing a letter to Congress urging them to regulate gun shows out of business, and supports the Obama/Bloomberg so-called “universal” background check system that would criminalize the private transfer of firearms between life-long friends and many family members.
Maybe Hays is trying to change the NRA from within, and maybe hiding his views from the NRA is part and parcel of that strategy. But I think there are more plausible explanations. Gun rights enthusiasts just wouldn’t like what they see if Hays was open about his record on gun issues.
I’m eager to see what other misleading statements Hays can make in the last week of the election to hide his far-left views.
P.S.: Tomorrow at noon the Federalist Society will be having a discussion on the second floor in the student lounge of Bowen Law School about the Constitutionality of 3D gun printing. You should go!