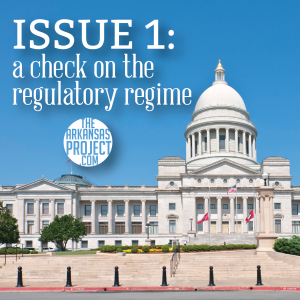 Arkansas voters can check and balance overregulation at the state level if Issue 1 is approved by voters.
Issue 1 allows voters to amend the state Constitution. In the words of the ballot title, it would ensure:
That administrative rules promulgated by a state agency shall not become effective until reviewed and approved by the legislative committee charged by law with the review of administrative rules under subdivision (a)(1) of this section.
This change would allow the state legislature to review new regulations coming from the executive branch before they became law.
This idea makes a lot of sense. State regulators are authorized to do their work by statute — which is to say, state regulators are supposed to carry out the mission that legislators have already laid down. Perhaps it’s a matter of opinion as to whether regulators are creating rules that go outside of the mission they’re asked to perform — if so, the best judges of whether the work of regulators is in bounds or out of bounds is presumably the legislature, because it is the intent of the legislature that regulators are supposed to follow.
The policy branch of Arkansas government is the legislature, and allowing the legislature to place a check on regulators seems to us to restore the balance of power.
This is not just an abstract debate; overactive regulators actually harm workers and consumers on a regular basis. As we’ve previously noted, occupational licensing in Arkansas destroys jobs by blocking entrepreneurs in some industries from working. If Issue 1 is approved, it would ramp down regulatory attacks on people like Arkansas businesswomen like hair braider Nivea Earl, who would then be able to appeal to legislators and make them aware of a proposed harmful regulation hindering her economic freedom. Instead, earlier this year, she was forced to sue the state of Arkansas over its excessive licensing requirements for hair braiders — simply so that she’d be allowed to work. This lengthy and painful process might have been avoided if Issue 1 had already been enacted.

2 thoughts on “Issue 1: A Check On Regulators”