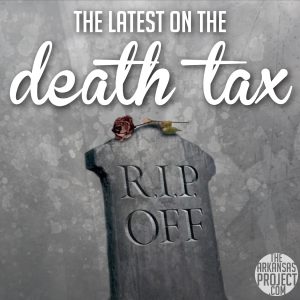 Dying is inconvenient enough, but — even worse — you can get heavily taxed for it.
That’s why I was glad to see the House delegation from Arkansas help pass a bill on the floor that would repeal the death tax — a tax that falls hardest on small business owners and families that own farmland.
The tax can amount to as much as 40 percent of the estate. One of the most persuasive arguments in favor of repeal of the death tax was made in a recent article by the American Enterprise Institute’s Tim Carney: he made the point that most of the lobbying against the death tax’s repeal comes from the estate-planning industry — which makes much of its profits because of the death tax’s complexity.
From Carney:

…about two-thirds of Americans tell pollsters that they oppose the death tax. …But some segments of the population feel differently — most notably, the estate-planning industry. A survey by an industry magazine in 2011 found that 63 percent of estate-planning attorneys opposed repeal of the estate tax. That’s fitting. The death tax forces people to engage in complex and expensive estate planning. Lobbying disclosure forms show that the insurance industry is lobbying on the issue these days. The Association for Advanced Life Underwriting, which represents companies that sell estate-planning products, lobbied on the issue last year, as it has for years. Last decade, AALU funded a group called the Coalition for America’s Priorities, which attacked estate tax repeal as a tax break for Paris Hilton. …When the estate tax was last before Congress, the life insurance industry revved up the troops, spending $10 million a month on lobbying in the first half of 2010. In that stretch, only three industries spent more, according to data from the Center for Responsive Politics.

This is another example of “Baptists and Bootleggers” regulation. In a just world, estate-planning attorneys’ top concern would be protecting people’s assets from being taken by the government when they die. Repealing the death tax would advance this goal, so you’d think they would support it. However, if the tax code becomes less complicated and punitive, then fewer people go to estate-planning attorneys — so those attorneys wind up lobbying against death tax repeal. Ain’t democracy great?
More from Carney:

The Clintons may be stupid-rich, but they aren’t stupid — they’re using estate-planning techniques to avoid the estate tax. Bloomberg News reported in 2014 that the Clinton family home has been divided, for tax purposes, into two shares, and those shares have been placed in a special trust that will shield Chelsea from having to pay the estate tax on the full value of the home when she inherits it. Also, the Clintons have created a life insurance trust — a common tool wealthy people use to provide liquidity for heirs to pay the estate tax. The Clintons’ games, and the estate-planning industry’s interest in the tax, highlights how the tax fails at its stated aims of preventing the inheritance of wealth and privilege. Instead, the estate tax forces the wealthy to play games in order to pass on their wealth. These games don’t add anything to the economy, they just enrich the estate-planning industry. Those whose wealth is tied up in a small or medium-sized business, on the other hand, aren’t always capable of playing the estate planning games. They’re the victims.

So like many taxes and regulations, the death tax falls hardest on those — unlike the Clintons — who can’t afford to hire an army of lawyers to figure out loopholes to lessen their tax burden.
As Rep. Bruce Westerman said last week:

My vote Thursday for the ‘Death Tax Repeal Act’ was about protecting families at home in the Fourth District. These families often own timber land, family farms, or other small businesses. And without an elimination of the estate tax, many of these families are at risk of losing up to 40 percent of their inherited business. Many families have turned to clearing trees, selling parts of their land, or liquidating assets to pay the tax, resulting in poor land management and loss of hard-earned assets essential to continuing these thriving small businesses. It is wrong to charge families an estate tax simply because a parent passed a business onto an heir after a generation of hard work.

Here’s hoping the death tax is headed to the grave!