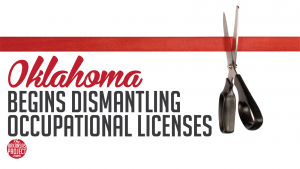 The task force was created by Oklahoma Gov.

Mary Fallin last year to give recommendations on burdensome or unnecessary regulations that might act as barriers to entry for potential workers.

Occupational licensing often can be overly burdensome, which can hinder a person from earning a living and providing for their family. These unnecessary or outdated barriers make it harder for many Oklahomans, particularly those who may not have completed a formal education as well as some minorities. This can help them to obtain jobs and build new businesses that create jobs.

The task force’s first meeting is Wednesday. Oklahoma Department of Labor Commissioner Melissa Houston told the Norman Transcript that the task force would be studying whether there was a “compelling public interest” for the occupational licenses the task force will examine.

From the Norman Transcript:

The first question on the blueprint asks if there is a compelling public interest that needs to be protected through occupational licensing. The second is what is the least restrictive option for ensuring that public interest.

“The whole purpose of having an occupational license, the whole purpose of requiring a government permission slip, is to protect the public health, public safety, basic rights or substantial economic interests of the public,” Houston said.
As an example, Houston said a human resources professional may just need a certification that does not need to be monitored by a government entity. But, for the sake of public health and safety, a doctor needs more than just a certification before they begin treating patients and prescribing medicine.

So, it looks like Oklahoma is on the right track when it comes to reforming their occupational licensing regulations. Unfortunately, we can’t say the same for Arkansas. Arkansas legislators had multiple opportunities to do so in the previous session but didn’t follow through on them. Heck, they even refused to form a subcommittee to study the issue further.

According to the Institute for Justice (IJ), Arkansas has the second-most burdensome occupational licensing laws in the nation. Ignoring this problem won’t make it disappear. Other states like Oklahoma are beginning to take action to protect their citizens’ right to earn an honest living by reforming occupational licensing laws that limit opportunity. Arkansas should follow suit or risk being left behind. Regrettably, our state’s slow walk to progress is evident in our refusal to shed our outmoded licensing laws, our relatively heavy tax burdens, and our unbalanced civil justice rules. Other states continue to pass us up. We hope there is a political appetite for progress, not stagnation, in our future.