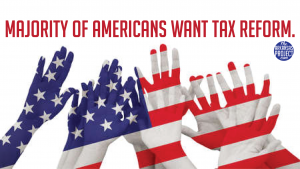 A majority of Americans support simplifying the tax code and lowering rates, according to a new poll by the American Action Network.

White House staffers have previously said their goal is for tax reform legislation to be signed into law by the end of 2017. All four members of Arkansas’s House delegation told The Arkansas Project recently that they’d be supportive of tax reform.

It’s clear that Americans, regardless of ideology, widely support fixing our broken tax system. Americans recognize the positive impact a tax code with lower rates would have on working families and small businesses competing with other countries like China. This new survey comes with a strong warning that Americans expect both parties to work together and would reject efforts by members of Congress to obstruct these popular proposals.

Americans also expected Congress to be able to pass legislation reforming health care too, but I guess we’ll see soon if tax reform actually has a better chance of success later this year.

You can view the full poll results here.